Share via
Law firm Bond Dickinson has released data that shows SME collaboration is high on the priority list for corporates. The trend of SME collaboration, which has seen large firms make an increasing number of deals with smaller businesses over the past three years, fell by 28 per cent for 2016/2017. That said, SME collaboration is still a major priority for corporates. Large businesses spent ?21bn across 1,111 deals over the last tax year ??that?s 31 per cent more than the ?16bn that was spent on R&D, which shows the value placed in SMEs. Comparatively, the number of deals sat at 1,326 in the 2013/2014 and rose to 1,536 in 2015/2016. 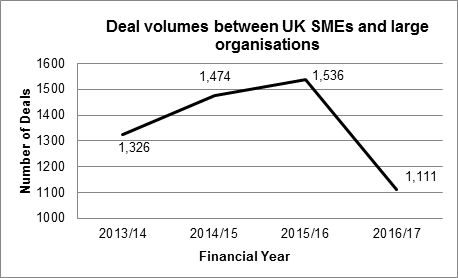 ?Collaboration with SMEs has become a key strategy for delivering corporate innovation,? said Jonathan Blair, managing partner, Bond Dickinson. ?Business leaders know that neither corporates nor SMEs are perfectly built to deliver innovation alone, but the reach and power of one, combined with the agility of the other can be a potent combination.? He added that the decline of deals is due to economic uncertainty swirling around businesses in the UK and Europe and described it as a ?short-term hiatus?. Elsewhere, between 2013/2014 and 2016/2017, large firms have made 5,447 SME collaboration deals, accounting for over ?102bn ? significantly more than the ?62bn spent on R&D. On the back of Blair?s comment about a hiatus, Bond Dickinson cited ONS figures, which found business investment declined 1.5 per cent in 2016 in line with Brexit. Cebr, meanwhile, has predicted a 3.4 per cent fall in 2017. According to the law firm firm?s findings, financial services is the industry where large firms are most eager to embrace SME collaboration, for both volume and value of deals. Some 1,864 financial services SME collaboration deals were made in the past four years, an investment of ?31bn ? 34 per cent of the national total. A stat Bond Dickinson was keen to highlight is the way in which the financial services firms are making deals ? 75 per cent bought minority SME stakes, compared to the national average of 44 per cent. Simon Pilling, corporate partner, Bond Dickinson, added: ?Multinationals earning in dollars are in clover right now, and borrowing costs are at an all-time low, yet we?ve still seen this fall in deals with UK SMEs. Negotiations are being strung out as corporates continue to work out how the final EU deal, or lack of one, will affect them. “Yet fortune favours the brave, and this slowdown creates a window of opportunity for strategic acquisitions. Added to an incredibly strong startup ecosystem, first rate universities and a tech talent pool to rival Silicon Valley, there might not be a better time to secure the perfect innovation partner.?