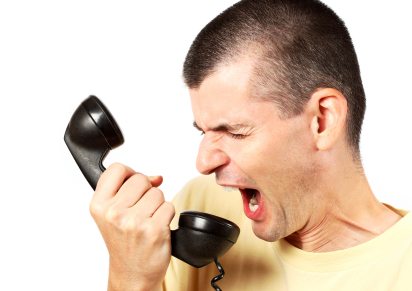 Alternatively, you could try the following ten techniques, described by Ruth Nicholas in 1997, as suggested by a cross-section of our readers.

1. Torture them by telephone

Of all the bugbears in business, the front-runner is voicemail. Across the UK, companies are damaging their customer relations by replacing receptionists and telephonists with time-wasting, irritating, tedious, answering machines. Across the board, telephones are driving business people crazy. Do you get asked to hold ? only to remain stranded on the end of a silent line? Like many business people, advisor Shelia McKenzie sets aside Monday mornings for paperwork, only to be bombarded by people wanting to know whether their letter has arrived.

2. Pay them late ? and bill them wrong

Payment problems are a blight on business life. Almost all our respondents mentioned them. No matter how carefully you nurture a relationship with another company, it seems, it’s becoming ever more difficult to get them to pay on time ? and with good grace. And if you want to remain in business, don’t write worthless cheques. Late payment also appears to have become an everyday fact of business life. Some people even think that legislation would have little effect.

Lateness is another universal dislike. Almost all the people we questioned mentioned it. It’s rude, it wastes everyone’s time, and it’s easily avoided by using a diary. Martin Randerson, former managing director of The Travel Professionals, won’t do business with people who are late for meetings – ?unless they have got a really good excuse. There are very few reasons for being late. If someone is stuck on the M25 and you can hear that they’re on the carphone, fair enough. Otherwise your diary should be organised in such a way that it works. People who aren’t concerned about time are a major irritation.?

The business people we spoke to want to be honourable ? and would like, in return, to be treated with honesty. All too often, however, promises are broken. Too often suppliers over-promise and under-deliver. There was a consensus on one depressing feature of business life: people who say they will call in a few days or send information and don’t.

?The worst is when you are waiting to hear if you have won a piece of business,? says David Bailey, co-founder of Impact Plus, acquired by Hitachi Consulting. ?The client says that you’ll hear on Friday, and, of course, when it comes to it they are too embarrassed to tell you that you haven’t got it.?

Good manners mean good business. Obvious? Apparently not. According to our respondents, an astonishing number of business people forget the basic rules of behaviour. Here are some things you shouldn’t do if you want to keep your customers: Missing meetings is unforgivable, as is forgetting that someone is coming to see you; don’t cancel, at four hours’ notice, meetings that were set up weeks in advance; don’t have a chat on your mobile phone during a meeting. Don’t tolerate surly receptionists. And for goodness sake, if you ask someone in for a lunchtime get-together, at least offer them a cup of coffee.

6. Tie them up with bureaucracy

Bureaucracy is both the bedfellow and enemy of business. It is estimated that ten per cent of a business person’s life is taken up with needless bureaucracy. ?It is incredible that so many companies will not take your money without an official purchase order because their system can’t cope without the relevant number?, says one company director. ?There is so much form-filling for the sake of it.?

One side-effect of bureaucracy is that the left hand doesn’t know what the right hand is doing. Result? Receiving a standardised mailshot from a company you are already using. Or receiving a demand for payment from one department when you have been credited by another.

7. Bombard them with junk mail

Direct mail is so prevalent that it’s almost excusable. What isn’t is applying blanket, junk mail techniques to regular, valued customers. If a customer has built up a relationship over years, they should expect to receive something better than a standardised form letter. But addressing someone who bought a box of staples from you four years ago or who has never done business with you as a ‘valued customer’ is plain daft. Want to guarantee that your correspondence goes straight into the bin ? and makes you look foolish? Try addressing Mr Smith as Miss Smith, or vice-versa.

It’s unethical and it’s happening all the time. Many companies say they would like to meet to discuss business when the prospects are slim. ?The time and effort you waste putting together a presentation costs money?, says Stephen Callender, former managing director of Black Cat.

Clients will also deliberately flirt with suppliers they have no intention of engaging. First, it’s a cheap way of generating new ideas. Two, it’s an effective way of scaring existing suppliers into a better deal ?the board insists on a regular statutory review, so they have to make a foregone conclusion look like a genuinely competitive pitch.

9. Baffle them with jargon

Everyone comes across ditherers. And they are not only infuriating, they’re expensive. Ditherers know that they need never be alone ? they can always hold a meeting. Ask yourself whether you hold meetings that wobble off the agenda leaving the central issue unresolved. ?We’ll get back to you? is an oft-used and much hated phrase.