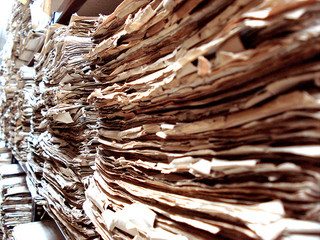 To mark the importance of preserving and extracting value from information on Data Protection Day, here is Iron Mountain’s list of ten things we only know because the paper records were protected:

Seismographs left on the moon by astronauts in 1969 carried on quietly transmitting data to earth for 20 years after someone forgot to switch them off. When the many rolls of data were finally spotted, the results proved crucial in determining the composition of the moon’s core.

Solar flares can have a highly disruptive impact on electrical grids, global positioning systems and communications networks. In the western US, solar flare forecasting depends to a large extent on daily hand-drawings of the sunspots observed through a mountain-top telescope. This process has remained unchanged since 1917, resulting in an archive of 23,350 drawings.

Academic researchers keen to better understand the psychology of serial killers undertook a detailed study of 30 years of newspaper archives (1980 to 2012). This revealed that the most common profile of a family-killer was an employed, thirty-something man, and the time of greatest risk was a Sunday afternoon in August.

In January 1998, a California police officer decided to plot on a paper map the details of a recent bout of purse snatching and to use this and his notes to mathematically predict the next most likely location and date for attack. His conclusions proved accurate and paved the way for the sophisticated COMPSTAT crime-mapping system the Los Angeles Police Force now uses.

Some medical myths turn out to be true after all. For example, regular doses of Vitamin C really can help with colds, but only to reduce the length of symptoms, according to a major systematic review of medical trials between 1966 and 2012.

A systematic review of 75 studies between 1950 and 2011 found that flu vaccines offered no benefit to infants under two years of age, despite many governments recommending the immunisation of all children between six and 23 months.

Paper documents through the centuries have passed on medical lore that modern science has now been able to substantiate. In 2735 B.C., the Chinese emperor Shen Nong wrote a treatise on herbs that recommended the use of ephedra against respiratory distress. Ephedrine, extracted from ephedra, or its synthetic form, pseudoephedrine, is today widely used in decongestants by leading pharmaceutical firms. Other common pharmaceutical drugs that are based on plant origins with an ancient track record include Aspirin, Quinine and Digitalis.

Analysis of previously unseen 17th century paintings revealed that denim was widely worn by the working classes in Genoa in Italy in the 1650s, around 300 years earlier than generally supposed.

The enduring mystery of pilot Amelia Earhart’s disappearance in 1937 may finally be laid to rest after a high-technology analysis of a faded 1938 photograph revealed what appeared to be an aeroplane tail fin sticking out of the water near the island off Japan where her plane was last seen. A 2012 expedition to the island discovered remnants of a jar believed to have held 1930s anti-freckle cream. An underwater mission to find the wreckage is scheduled for September 2014.

A mathematical economic analysis of the Domesday Book, the famous 1086 catalogue of England’s lands and assets, which was digitised and placed online in 2006 – has revealed that the average efficiency of the 11th century agricultural economy was comparable to, if not higher than, more modern economies. Christian Toon is head of information risk at Iron Mountain. Image source