Skip to content
Interviews
Share via
Will Dean trod a fairly familiar path before setting up Tough Mudder, completing a degree in the UK and then venturing over to Harvard Business School to further expand his skill set. However, what he did after that was a direct departure from not just what his tutor’s advised, but also what the rest of the market was doing at that time. As an active person, Dean was well versed in the growing popularity of marathons and triathlons as adventurous people sought new challenges. However, his more unique observation was that not everyone out there was looking for a race and competitive finishing time. Tough Mudder was born out of a realisation that it’s more the pursuit of a personal challenge than a race for many individuals. It’s not where they place amongst others, but the teamwork and camaraderie that comes from conquering a new test or overcoming fears. “There wasn’t really anything like it at the time,” Dean told us. “My Harvard Business School professors were negative about it as it was hard for them to get their heads around a race that wasn’t a race.” Many others told him it wouldn’t be possible, with a litany of issues such as insurance liability and logistics complications sure to trip him up before he ever got going. Then there was the fact that Tough Mudder didn’t have the scalability simplicity of a new app, it would ultimately require sending people out into fields to scout new locations. “The term ‘disruptive’ is quite overused, but what we were doing was quite disruptive to the traditional way of looking at endurance events,” Dean explained. “We were going outside of the city, focusing on the team and making it fun.” Being disruptive and challenging the status quo has some inherent risk involved, so how much was on the line for Dean? “There was a lot of risk. I had just graduated with $200,000 dollars of debt, and had $20,000 in the bank. I ploughed all of the remaining funds I had into the business – it was a huge leap of faith.” While Dean was at a stage of his life where he was 28, had no children or mortgage and possessed a risk for appetite, he still needed to make the first event work. A typically muddy field in the US state of Pennsylvania was the location, and Dean set his team the target of selling 500 tickets. Fortune favoured the brave, and when it came to firing that very first gun there were 5,000 people on the start line. Part of the success of Tough Mudder – it has held hundreds of events across nearly a dozen countries in four continents – is its focus on branding and community. Dean described the Tough Mudder crowd as a kind of “tribe” led by the likes of Jim Campbell – a “Mudder Legionnaire” who has completed more than 100 events. “About 10,000 people have had Tough Mudder permanently tattooed – it doesn’t get much better than people branding themselves with your brand,” Dean revealed.

So what is it about an event that sees participants plunge themselves into a skip of ice water, get electrocuted by 10,000 volts or somersault off of a five-metre platform into murky water? “Sometimes people call us a fitness business, but we’re not. We’re a variation on that. You do a Tough Mudder and you’ll feel great about yourself. Jumping into a skip of ice is not essentially fun, but maybe you conquered your fear. It’s about building confidence in life, doing things that scare you,” Dean believes. “People do our events and write to us the next day saying they were getting bullied at work but went in on Monday with their Tough Mudder orange headband and told their boss that they can’t talk to them like that anymore.” The camaraderie and sense of achievement Dean places such a value on has also stimulated some serious fundraising efforts. To date, Tough Mudder has helped raise £2.5m for its chosen charity, Help for Heroes – something he is particularly proud of.

Leveraging Tough Mudder’s tribal following has allowed Dean and his growing team to launch new events in different countries and at different distances. However, the entrepreneur sees this as both a blessing and a curse – it’s often hard for him to decide what new ideas to move forward with, and when. “We could be doing millions of things like our own TV shows, opening gyms, live streaming or more sponsorship. It’s a high-class problem, but you have to say no to lots of good ideas. Most people are capable of prioritisation, the hard part is de-prioritisation.” There are few key elements to future Tough Mudder expansion, at least in the next couple of years. First of all there is international expansion into places such as China and New Zealand. He is also moving forward with a 5km version, expanding the Tough Mudder half and kicking off with a competitive series that will see the more competitive compete against each other.

Part of staying ahead of the competition, attracting new participants and giving the tribe what they want is staying fresh through updated obstacles and offerings. Dean recently went back to his alma mater, Bristol University, to be part of a six-week challenge designing Tough Mudder obstacles. “I’m not one of those entrepreneurs who things everyone else should be, but the subject has that mystique to it,” he commented. “What Bristol University has down well is recognise that business isn’t all academic, it’s about learning hard skills. They say ‘get your degree, but spend some time learning practical skills too’.” For Dean, getting involved with this kind of thing isn’t about “giving back”, it actually makes him a more effective CEO. Thinking about something that is different from just the day-to-day of business is rewarding and fun for him. Higher education, and indeed secondary school, must do more to help people enter the workforce as it’s a very different one to generations before, he believes. Seven years after that first race, when 5,000 unsuspecting participants turned up in a field, Tough Mudder has grown to a position where it’s turning over an amount far more than the $100m it reported for 2014. With 10,000 tattooed ambassadors running round the world, what advice does Dean have for building a brand. “Take it down to something useful, and keep it simple,” he said. “A startup doesn’t have same recourses as a big business does so you have to have something that is brutally simple.” “The next thing to make sure of, partially when talking about a tribal following, is have something unique – it can’t be a case of ‘me too’. Tough Mudder was truly different. Finally, persevere, persevere, persevere. So many people will ell you it won’t work. But, in moments of doubt and stress, if you look at the success stories they pick themselves back up after being knocked down. It sounds like a cliche, but that’s because it’s true – the best entrepreneurs are the most resilient.” 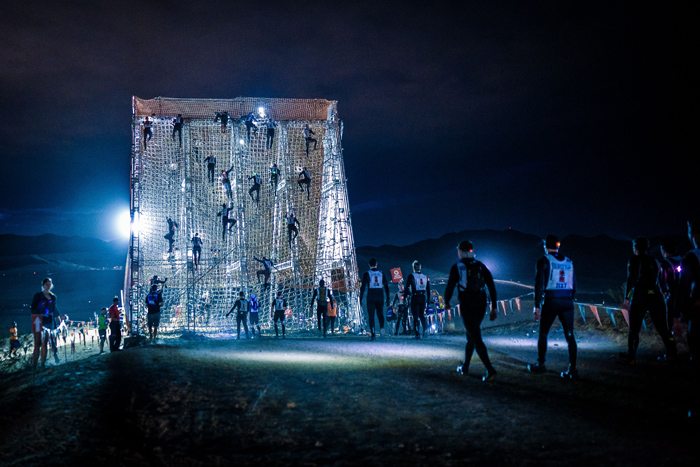