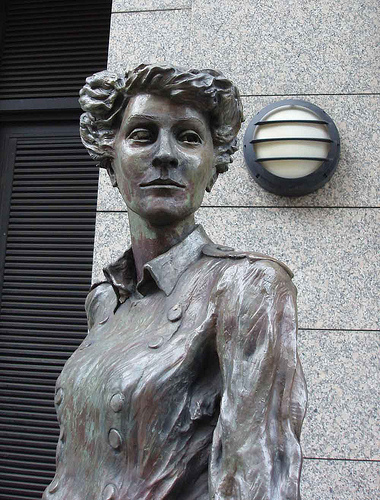 Constance Markievicz was a part of the Irish suffragette movement and active member of Inghinidhe na hireann, a radical Irish nationalist women’s organisation, in 1900. In 1909, as a member of Sinn Fin, she founded Na Fianna Eireann, a scout organisation with the object of educating the youth of Ireland in national ideas and re-establishing the independence of the nation. She later provided food for the workers’ families in the 1913 Dublin Lockout. And two years later, she helped train the Irish Citizen Army.  She was made second-in-command to Michael Mallin and was active in fighting during the Easter Rising, afterwards being the only woman to be court-martialled. She served 13 months in gaol, where her death sentence was changed to penal servitude solely on the account of her sex. It didn’t take long after release and the Irish Civil War, however, for her to end up back in jail. Running for office from Holloway Jail in 1919, Markievicz was elected as the first woman to the English Parliament. But as a member of Sinn Fin, she never took her seat. Instead, she served as Minister of Labour.

Although the Stock Exchange rules had never barred women, every time they had applied to become a member, they had been voted down by existing ones. This also meant that although they could manage clients’ money and become stockbrokers, they could never become partners of their firms. Hilary Root was the daughter of a senior civil servant, while Elisabeth Rivers-Bulkeley was a three-times winner of the Women’s Austrian skating contest, Daily Telegraph financial columnist and founding member of Annabel’s nightclub. Muriel Wood started her City career as a typist in 1925. Every time she was rebuffed, she would return the next year to try again. In 1971, when the story was published by The Female Eunoch, Parliament finally intervened. It was only in February 1973 when women were finally admitted because the London Stock Exchange had agreed to merger with all regional exchanges, which already had female members. So, on March 26, not one but six female stockbrokers were elected into ‘the House’ after a two-decade long battle which involved tireless campaigning. Susan Shaw is deemed to have been the first female (apart from the Queen, to set foot on on ‘the House’ floor. Image source By Shan Schutte