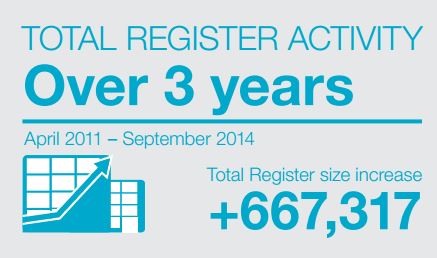 A total of 445,485 new businesses have been incorporated so far in 2014, a 16 per cent increase on the same period in the previous year and 67 per cent more than the same period in 2012. This means that eight out of the top ten busiest months for company incorporations since the start of the recession have now been recorded in 2014.

There were a total of 48,336 incorporations and 37,356 dissolutions in September (the number of dissolutions is slightly higher due to a processing backlog in August), causing the number of companies on the register to reach 3,348,517. The total company register has increased by over 600,000 companies in the last three years and 2m over the last 35 years. In 2012 and 2013 October was the busiest month for start-ups, meaning this month could turn out to be the busiest period for start-ups since the recession began in 2008. In September 2014, there were 1,739 company liquidations in the UK. Almost half of these liquidations were creditors’ voluntary liquidations. In addition, there were 223 insolvency proceedings notifications, of which 52 per cent (115) had administrators appointed closing the month with 80,580 companies in the UK that were in the process of insolvency.