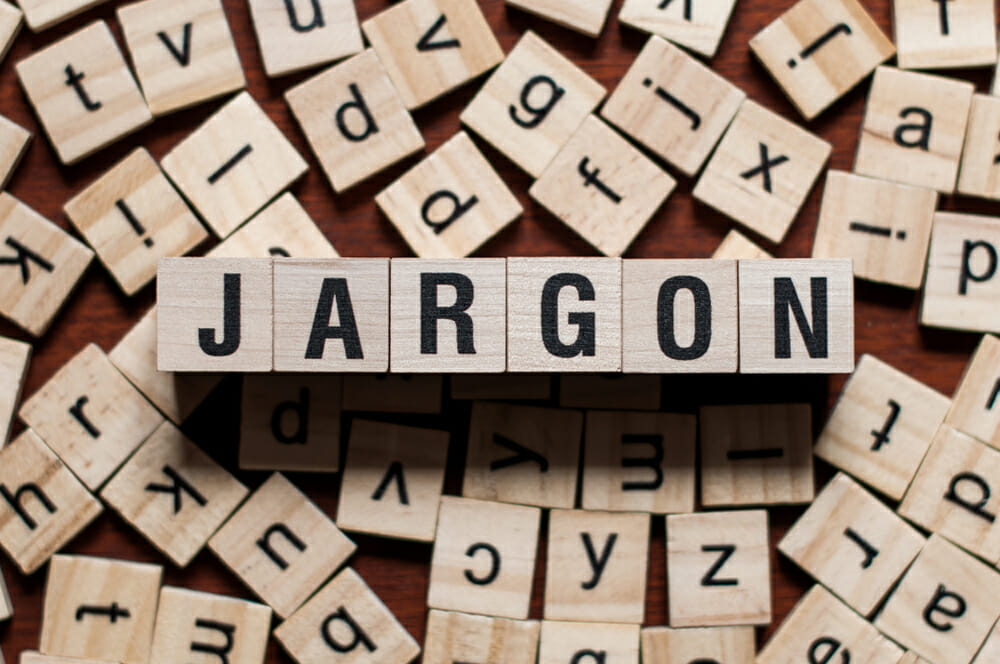 Share via
There’s no doubt about it, business jargon can be annoying. Especially when overused or – even worse – misused. Here are 30 of the most overused and annoying business jargon terms and what they really mean. Back to the drawing board – usually used when an idea didn’t work out or faulted part way to completion. When things don’t go to plan, you regroup and come up with a different way to solve the problem. Bite the bullet – originated during the US Civil War when wounded soldiers would literally bite a bullet during surgery. These days, it means to take a difficult step or make a tough decision. Bleeding edge – products, services or technology which is so new it generally has a high degree of uncertainty. Often used in relation to extremely new or risky technology. Boil the ocean – to waste time attempting to complete an impossible task. It would take a long time to boil the ocean and the usefulness of doing so is questionable. Close of play – to get something done by the end of the day. Drill down – often used by management when they want a subject examined more closely. In finance it might be necessary to look more closely at the figures to understand the full implications of the financial data. Eat the frog – what you do when you’ve been procrastinating over completing an unpleasant job for too long. “It’s time to get over it and eat the frog!” Giving 110% – while it’s impossible to give 110% of anything this is often used when management want their employees to work harder. Someone giving 110% might start work early, complete their own and other people’s tasks ahead of schedule and leave the office long after everyone else went home. Hit the ground running – to do or start something with great enthusiasm and speed. I don’t have the bandwidth – or you could just say “I’m too busy to take on another project.” It’s on my radar – people say this to let you know that they are aware of something and – usually – intending to do something about it. Low-hanging fruit – refers to picking off the jobs, goals or targets which are easiest or quickest to complete successfully. Move the needle – often used by venture capitalists who want to know an idea is going is going to provoke a reaction. But it basically means doing something which makes a measurable and noticeable difference. No brainer – too obvious to explain. Open the kimono – share important details or data freely. Pivot – what you do when your business model proves to be less than 110%. An” established business may alter an existing product to produce a simpler, more effective version. A start-up might move to a new strategy when the first approach fails.

Sanity check – you’re halfway through the most annoying business jargon

Push the envelope – to test limits and trying out radical new ideas. You’ll gain more respect by having the courage to try new ideas without ever using this particularly annoying clich” to tell people that’s what you’re doing. Putting lipstick on a pig – if a product has fundamental failings a company might try and make minor alterations to improve it, but you can’t paint it a different colour in the hope of disguising the other problems. Raise the bar – to aim for higher standards, which you will achieve better by not resorting to using this phrase. Reach out – what someone says when they want to set up a meeting or make contact with a specific person or department. Reinvent the wheel – a pointless exercise in spending needless time and energy to improve something that is already functioning perfectly well. Scalable – a business which has opportunity to grow their market profitably and efficiently. Take it to the next level – to take something that is working and improve or develop it further. Take ownership – taking the initiative and making good things happen. Why wait for others to act when you could take ownership of the problem and achieve the desired results? The strategic staircase – a plan which breaks a project down into achievable bite-size pieces. Helps to establish priorities and required actions. Or you could just say business plan. Think outside the box – a phrase used to encourage people to look at things from another perspective in the hope that they will come up with different, creative, unconventional and brilliant ideas. Touching base / Circling back – that one annoying work task you’re just trying to get someone to respond to. Wash its face – a product, service or initiative which pays for itself. Window of opportunity – an optimum time to take action, usually a short amount of time which will soon close and be unavailable to take advantage of. 80/20 rule – also known as the Pareto Principle. Refers to 20% of your efforts accounting for 80% of your results. Or, simple way to view it, you might have 80 apps in your phone but only ever really use 20 of them. Unfortunately, this list is by no means exhaustive. Have we missed your most hated business jargon phrase Let us know on Twitter, Facebook or email the team at editors@realbusiness.co.uk