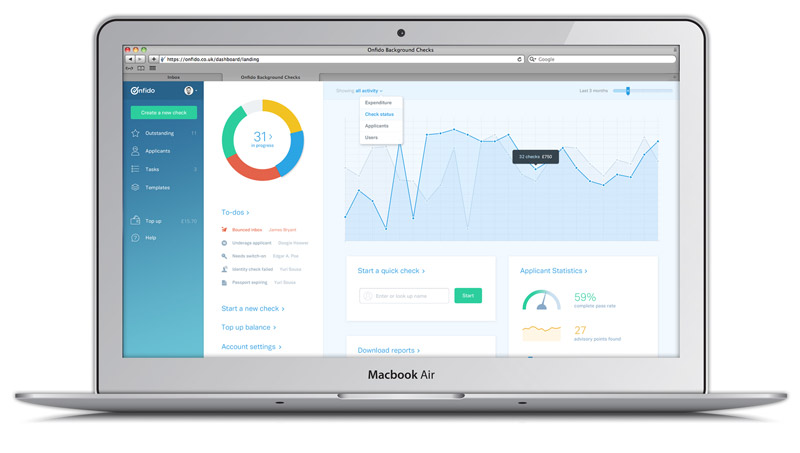 The online business, which allows checks to be monitored via a digital dashboard, was founded by Oxford University graduates Husayn Kassai (25), Eamon Jubbawy (23) and Ruhul Amin (27), who secured a seed round from the university when the company launched in 2012.

Its technology enables partners to conduct background identity checks on people to view everything from educational to criminal activities. Onfido claims ?the majority of checks are instant? though some can take up to five working days depending on the nature of the confirmation ? the goals is to end traditional manual checks in favour of a faster and cheaper alternative.

Spotify and Dropbox investor Wellington Partners led the round and general partner Eric Archambeau joined the board, while Airbnb and Uber investor CrunchFund also participated.

Archambeau said: ?I have been impressed from the beginning with Onfido’s revolutionary technologies and the strength of its team. Some have called Onfido ?the backbone of the sharing economy? as their quick and efficient global background checks allow companies to build the trust that is central to the growth of their platform. The plan is use this round of funding to build out the technology and launch in more countries.?

With more than 400 clients in 28 countries across Europe already, including recruitment firm Hays, Onfido will use the capital to gain further reach across the continent into a total of 35 countries by the end of 2015 and also into the US.

CEO Kassai, said: ?Remote and reliable verifications can be tricky for many companies. For example, over four million fake identities have been used to commit fraud in the UK. We ensure our clients are checking the correct person before carrying out additional checks.?