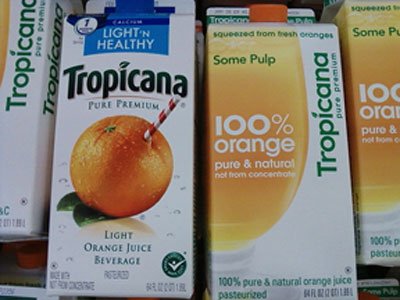 Share via
In the face of constantly changing consumer attitude and demand, many brands will come across a time where they feel a revamp is in order. But when rebranding goes wrong, it can spell instant disaster for your company. Here are four companies that failed in their rebrand and what you can learn from them:

Lesson: Never forget your market audience or most loyal customers Nothing is more confusing than a brand suddenly targeting a different audience. And although the word research is always flung around in such articles as this, it is absolutely critical that you understand your consumers ? this includes their lifestyle. Take Tropicana, for example. Although the packaging certainly looked cleaner, it had lost it’s identity and ?cheapened? the breakfast experience. Indeed, customers complained that the ?bland? and ?ugly? packaging now made it feel like they were buying a ?generic bargain brand? or a ?store brand?. But Tropicana’s rebranding did more than just cause a customer-relations fiasco, sales of their Premium line actually plummeted by 20 per cent. It had been on the market for less than two months before the redesign was scrapped. According to Neil Campbell, president at Tropicana North America, this change in heart wasn’t due to the volume of complaints as ?it was a fraction of a percent of the people who buy the product?, but because they came from their ?most loyal consumers. And we underestimated the deep emotional bond they had with the original packaging.?

Lesson: Never be in a rush to trademark ? and don’t always listen to the consumer Formerly known as the SciFi Channel, the main goal was to broadcast anything supernatural, paranormal, full of horror and aliens and, apparently, wrestling. The offering has stayed exactly the same but there was a very distinct reason behind their change in name. Foremost was the fact that the company couldn’t actually trademark the term “sci fi”, so were trying to find witty ways to get around the subject and had been trying to find ways to stay hip with its rather young audience. It was said audience that gave them a ‘brilliant’ idea. President David Howe explained in a TVWeek interview that ?the thing they got back from [their]18-to-34 techno-savvy crowd, which is the majority of the audience, is actually this is how you?d text it… It made us feel much cooler, much more cutting-edge, and much more hip.” So they went for it. SyFy, a statement read, was supposed to ? position the brand for future growth by creating an ownable trademark that can travel easily with consumers across new media and non-linear digital platforms, new international channels and extend into new business ventures.? But the name, as it turns out, ?alienated many longtime fans, and it was completely ridiculed.” For one, fans has been perfectly comfortable with the name sci fi, not to mention the fact that syfy is a slang term for Syphilis.

Lesson: The symbolism behind your logo represents your company, so choose wisely After 70 years of sticking to the same logo BP changed their logo in 2000.? It went through a complete makeover, only keeping its original colour palette. This is where it pays to remember that the symbolic meaning and reasons behind your choosing said logo represents what your company stands for. Let’s just say that consumers were livid. The current design, the helios, was meant to represent BP’s green growth strategy by mimicking the form of a sun. But when you’re in the business of drilling oil, misunderstandings can arise. For one, people may believe it to mean that BP is trying to pull the wool over people’s eyes. And even when global outrage died down, the Deepwater Horizon oil spill that followed directly afterwards almost ruined their reputation entirely.

Lesson: Sometimes new isn?t better One of the most important things to take into account is that if your product has been around for ages, not to mention is now considered a classic, it is therefore better to expand your offering rather than trying to recreate it.  Coke has tried the latter on multiple occasions, and has rarely met with success. And their launch of New Coke in 1985 is still deemed as possibly the worst corporate mistake in history.  At the time Pepsi was running a challenge taste test, and it turned out that testers preferred the sweeter taste of Pepsi rather than Coke. And, already coming close to loosing an ongoing battle with Pepsi, the company decided to take action. New Coke, which had a different formula, hit the shelves while normal Coke was ceased in its production. How wrong they were! Instead of taking to the altered flavour, customers ended up boycotting the product. After only three months, Coke withdrew New Coke from the market to reintroduce the original once more. It quickly outsold both New Coke and Pepsi. Another attempt to rebrand involved the can itself. In 2011, as part of a WWF pledge to help save polar bears, the company revealed that the Coke can colours would become inverted ? red text on a white background. Although it was for a good cause, customers complained that the product looked far too similar to Diet Coke and that they now found it harder to pick the two different offerings apart. Tropicana: Image source BP: Image source By Shan? Schutte