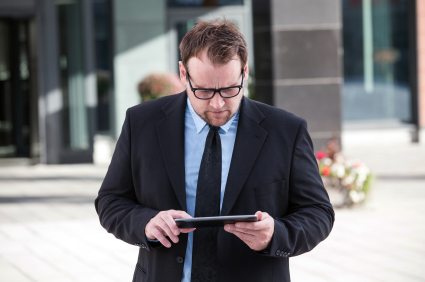 For example, look at how the smartphone has become the essential shopping companion. According to eConsultancy, 24 per cent of shoppers used mobile devices for Christmas shopping in 2012. Google reckon that 64 per cent of Britons access the internet on their smartphones at least once a day. And Google also estimates that one quarter of Britons intentionally have their smartphone with them to compare prices and inform themselves about products. Two-thirds of British tablet owners have made a purchase from their device. There’s a clear shift to mobile for last-minute queries for travel, hotels and accommodation. For example, in January 2013, 30 per cent of visits to Small Luxury Hotels’ website from the UK were from a mobile device. That’s 50 per cent more than the same period in 2012.

Mobile marketing is still modest compared to other forms of advertising

But so too was use of the internet not that very long ago. Is your website optimised for mobile? Spending on mobile advertising in the UK has now crossed the half-billion pound mark, accounting for ten per cent of digital spend. Mobile advertising grew like-for-like to £526m in 2012 – from £203m in 2011. In the last six months, 20 more of the UK’s top advertisers have produced mobile-optimised websites. Mobile video advertising grew 1,601 per cent (yes, you read that correctly) in the past year: from £0.8m in 2011 to £13m in 2012. That’s before 4G really begins to kick in.

So every business has to know its relevant mobile search metrics

This will either give you an edge (for now) or ensure you stay in the game (because rest assured others will get very, very cute). Recent analysis by the Direct Marketing Association showed that the number one search category for mobile users in the UK is news. But three out of ten people commonly search for local shopping information via their phones. And nearly the same percentage search for film and music. According to a survey by xAd and Telmetrics, only 34 per cent of mobile searchers know exactly what they are looking for. In other words, good location-aware mobile advertisements could really make a difference (particularly if you own a restaurant). Because in the UK, two-thirds of users notice mobile ads – with 20 per cent clicking through. Google research says that 37 per cent of Britons look for local information at least once a week on their smartphone – and 13 per cent look daily. Mobile search shopping queries are two times more likely to be in store, says Google. And 55 per cent of conversions (store visit, phone call or purchase) happen within an hour of a mobile search. Actions happen quickly! 77 per cent of mobile searches are performed in a location where a PC is likely also to have been available. One in three British iPhone users make a monthly purchase via their device.

The mobile phone is for calling people up, isn’t it?

Yes, but…The mobile is also the ultimate business model disrupter It’s money: 68 per cent of Kenyan adults report using a mobile phone for money transactions. It’s a means of staying in touch. Duh. Facebook accounts for 23 per cent of the time people spend on smartphones, says founder Mark Zuckerberg. It’s a medical device. It’s thought that 40 per cent of all apps in development have some form of healthcare context. In October 2012, more than 6,000 apps were classified as “health”, “Healthcare” or “medical.” Many apps now have the status of “medical device.” It’s a camera. In the US, more than four out of five people use their mobile phones as a camera.