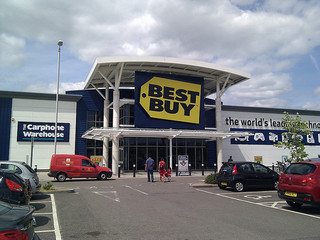 There’s hardly a top executive who didn’t start their career in a low-pay position. To get to the top, these five enterprising minds had to scale their way up the corporate ladder, often starting with unglamorous positions in the companies they would one day run.

Brian Dunn had worked in groceries since he was 14 years old. Deciding to follow his mother’s footsteps, who worked as an accountant at Best Buy, the then 24-year-old started his career as a store associate.

Dunn admits that on his fist day he hit the sales floor not really understanding all the items he was trying to sell to the customers. “It was a series of very difficult exchanges. At the end of the day, the store manager came up to me and said, ‘How did it go?’ I told him in very direct terms it was a lousy experience.?

But as Best Buy grew from a handful of stores in 1985 to more than 1,400 stores and 165,000 employees, Dunn grew with it. Four years after he first joined Best Buy, Dunn became store manager, and the next year he was the district manager in Minnesota. In 2006 he served as president and COO and was finally named director and CEO in 2009.