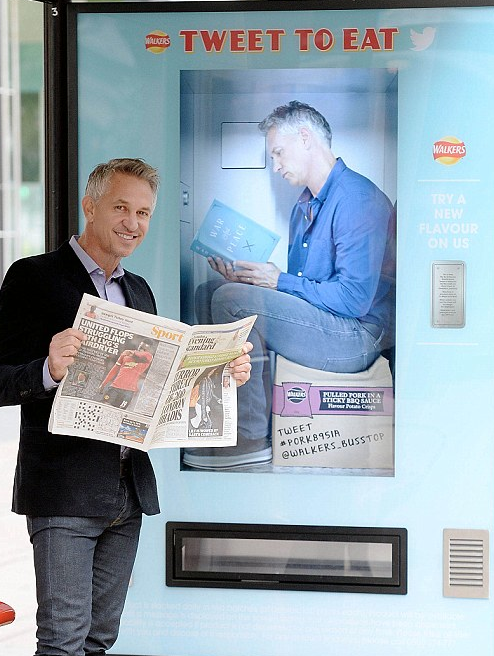 Share via
Here are some examples of brands connecting with their brands through highly successful social media campaigns.

Walkers’s ?Do us a flavour? campaign, which prompted the public to suggest new flavours, has found its final six contestants: Sizzling steak fajita, chip shop chicken curry, pulled pork in a sticky BBQ sauce, ranch raccoon, cheesy beans on toast and hot dog with ketchup. But they now need a winner and are looking to the public once more for a final vote. To help customers choose Walkers installed a tasty surprise for London commuters. Lee-Teng, marketing manager at Walkers, explains that: ?the campaign has taken the nation by storm so we are delighted to offer the public the chance to try the new flavours through the first ever interactive Twitter vending machine.? That’s right!?This month has seen the first Twitter vending machine come into existence. The company gave London bus stops the ability to produce free crisps to weary travellers who tweeted @walkers_busstop and the displayed code. Until the 11 September, each bus stop will give away 260 free packets a day, with the machines topped up between 11:30am and 17:00pm. How do you recognise one? Brand ambassador Gary Lineker appears to be sitting inside a vending machine, that’s how. There’s no second-guessing that such a vending machine will do exactly what it was meant to: increase customer engagement.

Precision scales company Kern came up with a brilliant method of boosting their reputation and following by targeting laboratories and the education sector. Trough the use of gnomes, the company went about setting up a worldwide experiment. Kern explains that the Earth’s gravity varies depending on where you are on the planet. This means that the weight of matter also varies, and, unlike any other product, Kerns had the means of measuring it. The sent ?gnome kits?, consisting of a Kerns scale and a gnome statue, to scientists around the world and asked them to join their experiment. Later on, their social media following could request a kit as well, and soon the internet was bombarded with people sharing their findings on social media, as well as photos of said gnome in front of famous landmarks. The gnome even managed to reach the South Pole.

Paddy Power has been known for its marketing campaigns, but one in particular stands out as a Twitter success. When England lost to Italy in the 2014 FIFA World Cup, it goes without saying that many Brits were upset. Apart from one, that is ? and he learnt his lesson quickly. Using a gibbet, a medieval device that had previously been used to punish highwaymen and murderers, they suspended poor ?Tony? in the air next to a green billboard that simply read: ?Traitor Tony. Backed Italy with Paddy Power. And made a killing. It?s treason season.? A spokesperson for the company said: ?The last time I used my gibbet was when Max Mosley was over for dinner ? but that?s another story. I knew it would come in handy one day and when I heard that Tony made a killing backing the Italian?s I couldn?t think of a nicer man to blow off the cobwebs for. Look at him now, that?ll learn him, the traitor?. This was all done within hours of Italy’s victory. The greatest part, however, was that the company encouraged passers-by to take a selfie with Tony and post it on their Twitter account using #Brazilnuts. If you did so, you had the chance to win a ?50 prize. By Shan? Schutte