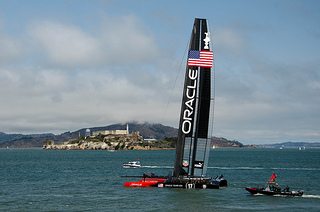 Technology played a bigger part in this year?s Americas Cup than ever before. Thousands of spectators both shore-side and at home were able to watch live on-board HD footage of the competitors as they battled in the bay, and the on-board technology was second to none.

Building and sailing an AC72 catamaran demands extensive performance analysis based on collecting huge amounts of data, and applying the right analytics to improve boat design and performance.  Here are the five essential tools that helped Oracle Team USA to succeed:

Depending on what we?re measuring, we?ll configure a light feed of about 150 key parameters and transmit them in real-time to the Oracle Database on the performance chase boat. For example, if we were measuring sail wing performance in certain conditions, the feed will be heavy on data from the wing.

The result could not have been closer: a 9 – 8 win over an incredibly talented Emirates Team New Zealand. Big data may not have been a crew-member, but there?s no doubt of the vital role it played in that performance. Asim Khan is director of information systems at Oracle Team USA. Image source