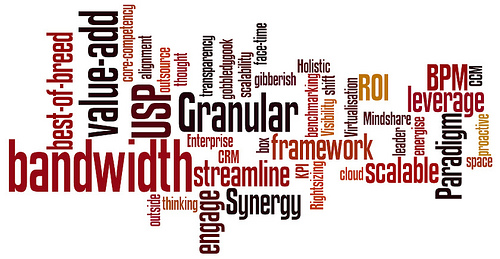 The survey, by leading office experts officebroker.com, asked more than 500 workers to name their top three most despised pieces of management speak.

Jargon clich?s such as ?running something up the flagpole?, ?thinking outside the box? and ?taking something offline?, also featured prominently. Nearly eight in ten office workers also confessed to using at least two examples of cringeworthy office jargon each day. Other examples of management speak which made workers see red included ?on my radar?, ?singing from the same hymn-sheet?, and ?low hanging fruit?. One man who took part in the study said: ?I?m someone who despises management speak, but sometimes I just can?t stop myself using it. More often than not it will happen in meetings when I?m presenting something. I?ll open my mouth and guff will just spew out. I can even hear myself saying it as well ? I sound like a complete pillock.? The top 50, in no particular order: Image source By Shan? Schutte