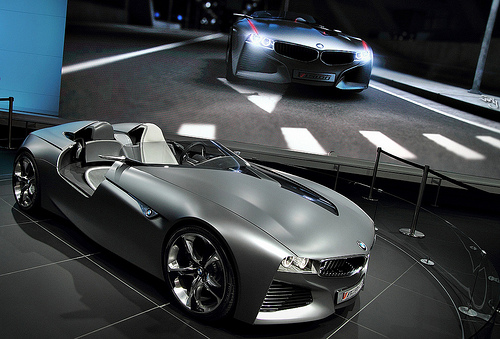 Although General Motors (GM) won’t be putting interactive display windows into production vehicles any time soon, they have confirmed that they are looking at using eletronically charded “smart glass technology” that projects images. So, GM challenged FUTURE LAB Bezalel Academy graduate students to conceptualize new experiences for rear seat passengers. The windows of opportunity project was born, which enabled car windows to become interactive displays. The students produced full-scale prototypes with multi-touch and gesture sensing capabilities developed by display company EyeClick. This is what the students came up with:

Land Rover’s latest invention is like the ultimate magic trick – the front of the car basically becomes invisible! The car uses a front-facing camera to see what’s ahead and then projects the image on the lower part of the windshield so that it seems as if you can see straight through the bonnet. This latest technology is being called “transparent bonnet” and is their latest effort to encourage off-roading. And besides an image of the terrain, the driver will be able to see the angle of the front wheels, the car’s speed and the degree of the slope they are trying to conquer. “As our vehicles become more capable and offer increasing autonomy off-road, we will ensure the driver has the confidence to progress over any terrain,” says Dr. Wolfgang Epple, Land Rover’s director of R&D. “We are developing new technologies including the Transparent Hood to give drivers an augmented view of reality to help them tackle anything from the toughest off-road route to the tight confines of urban parking.” Image source By Shané Schutte