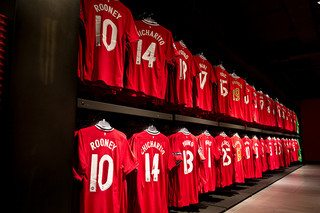 The best managers, players and business professionals study their rivals closely to build a strategy to outplay them; and more often than not, even when you have a set tactic in mind, something or someone gets in the way and steals the ball. And when you’re playing with the big boys in the Premier League, the stakes are high and the pressure is ON!

With this in mind, surely us office workers could learn a thing or two from the best in the world of football? So, I’ve decided to turn to one of the world’s most well-recognised clubs: Manchester United. Since founding the 153 years ago, the team has become synonymous with the most top-division titles, the most FA Cup Final appearances and has managed to build itself into a multi-million pound making business, reporting record revenues of £363m just a few months ago. But just how have they done it and what can business owners learn from them about driving repeatable success?

The club gives its managers total control of the team. It’s longest standing and most successful, Alex Ferguson, priding himself on his autocratic style of leadership. He himself explained that “you can’t ever lose control – not when you are dealing with 30 top professionals who are all millionaires. And if anyone steps out of my control, that’s them dead.” This control stretched from banning his younger players from driving the sportier cars supplied by Chevrolet when they became a sponsor, to prohibiting them from wearing snoods (neck-warmers) during training because “real men don’t wear things like that”.  Whilst these Stalin-esque techniques will always provoke debate, in his twenty-seven years at the reigns, the club won 38 trophies, including 13 Premier League and two UEFA Champions League titles. It’s clear that his ‘unique’ and inflexible brand of leadership contributed significantly to the clubs consistent success.

2. Identify and empower your own Class of ‘92

The club’s golden age was during the 1990s when Beckham, Giggs, Butt and Neville were all playing together. Crucially, these guys all moved up from the youth side together after they won the 1992 FA Youth Cup. Their young talent and worrying love of hair gel was fostered right from these early days and, aside from David, they’ve stayed with the club for the entirety of their successful careers. By identifying, motivating and moulding its best young assets, alongside fostering a real-sense of family, Manchester United ensured it made them into a true dream team and reaped the rewards.

3. Keep egos in check, but not with football boots

You can’t let one player’s ego dominate the team, no matter how good they are. Ferguson’s professional relationship with David Beckham allegedly broke down when he realised Becks was more pre-occupied with fame, wearing sarongs and marrying a Spice Girl than working hard on the pitch. “The minute a Manchester United player thought he was bigger than the manager he had to go”, explained Ferguson. Soon after, Beckham was sold to Real Madrid where his professional prowess went steadily downhill, whilst United continued to thrive. Having said this, I don’t recommend throwing a football boot at anyone’s head, no matter how frustrating they become – HR would not approve!

4. It’s better to risk it all, than to settle for a loss

Whilst the club is famous for making early concessions, it’s also notorious for coming back from a losing position to clinch a draw or even an emphatic win in the closing stages of a match. In the 1998-1999 season United came from behind to win or draw in 31 games. Last season they were down 3-0 to Chelsea at Stamford Bridge with just 30 minutes left on the clock, but came back to salvage a point by scoring three goals. The ability to come back from the brink like this is only possible because of the self-belief, confidence and hunger to win instilled in the players. Ferguson makes sure they understand the consequences of every loss with his fiery personality so they fight even harder next time they’re on the pitch.

When it looks like things aren’t going your way, the referee decides your player’s fouled or your opponent throws pizza at your head… don’t back down. Despite a five-match ban for publicly questioning Martin Atkinson’s decision not to give Chelsea’s Luiz another yellow card, when Nani got red carded against Real Madrid in the Champions League he screamed so much abuse at officials it looked like he was going to break his pacemaker. The lesson? Don’t take bad news lying down. Fight hard and get creative to solve your problems and overcome your adversaries. The next time you’re in deep water ask yourself: “What would Fergie do?” and feel you blood pressure soar.

6. Surface the best opportunities for growth

Just a few months ago Manchester United reported record revenues of £363m. According to the breakdown much of this was achieved by monetising things outside of the club’s core product, match tickets. By putting a greater emphasis on alternative revenue streams such as its some 34 sponsorship deals, merchandising and product licencing it has transformed into the second richest club in the world, squeezed in between Real Madrid and Barcelona. Without those weird partnerships with Mister Potato (official savoury snack partner) or Mamee (official noodles partner), United wouldn’t be able to afford choice signings like Marouane Fellaini. Frank Reinelt is Regional VP of UK of Northern Europe and Emerging Markets at Mindjet Image Source