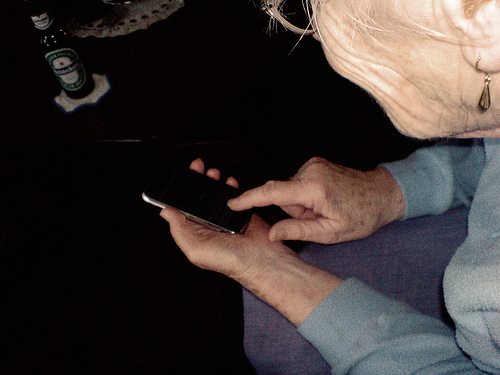 On an average day, those 65+ indicated they check their email inbox five times more than those aged 55-64.

Another question evaluated the physical relationship between this age group and their mobile devices. A surprising 63 per cent of those over 65 reported that they never stray more than ten metres from their mobile. One in ten also admitted to keeping their phone on them at all times. Kenny Bain, EMEA general manager for KANA, said: “Often considered late adopters, this study shows that the over 65 age group make up some of the most prolific users of mobile technology and are quite happy to engage in frequent communication via digital channels.” Further mobile trends and statistics from the study indicated how this segment of the baby boomer generation checks status updates and responses via their mobile devices, suggesting their usage frequency also impacts their customer service preferences and expectations: The research reinforces that the 65+ demographic is embracing mobile for everything from keeping in touch with family, to paying bills online and requesting services of governments and merchants. With people working well into their 60s, there is an argument that pensioners have now got the edge on mobile device productivity. Additionally, the study revealed that it’s not just teenagers who are wedded to their mobile devices. The 65+ age group tends to keep phones in reach, with almost half claiming they never miss a call.  Bain adds, “Our data shows that customer service organisations must be mindful of the 65+ aged consumer who is more responsive and tech savvy than ever before. Consistent multichannel service capabilities with agents and digital self-service options must be available to everyone, as long-held assumptions about pensioner consumers being less inclined to engage with organisations through digital channels are fast becoming obsolete.” Image source By Shané Schutte