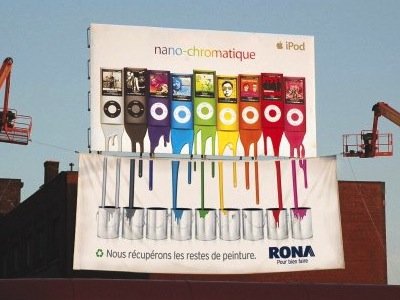 Here are eight excellent examples of ambush marketing, including what they did and why it worked so well.

In Canada, Montreal, Apple had a billboard promoting the iPod nano, where the colour of the iPod would drip down at the bottom. Home improvement chain Rona saw a great opportunity and pulled off perhaps one of the greatest ambush campaign stunts. They placed a banner below Apple’s billboard so that it looked like the paint was falling into buckets. The text on their banner translated into: “We recycle leftover paint.”

Newcastle Brown Ale is known for its cheeky marketing stunts, and as part of their “No Bol**cks” campaign, decided to mock rival Stella’s use of the word chalice. A Stella billboard read: “It’s a chalice. Not a glass.” Newcastle’s agency, Droga5, added a billboard of their own underneath, stating: “Who uses the word chalice?” Simple, yet highly effective!

In 2012, Fiat noted that Google street view cars were roaming the streets of Södertälje in Sweden. What did they do? They followed the car for 45 minutes until they were close to VW’s headquarters, then zoomed ahead and managed to park a bright red Fiat 500 in front of the building. What’s amazing is the fact that the car was literally on the doorstep… leaves you wondering how they managed to get the car up those stairs. And due to Google’s pattern of delayed updating, the image remained there for a year or two. Unfortunately… the Google car also mapped the car going to and leaving the scene of the crime.

4. Stella becomes the (un)official beer of US Open – a prime example of ambush marketing

In the 2011 US Open, Heineken was the official beer sponsor. Despite this fact, Stella chose the closest station it could to the Bille Jean King National Tennis Centre and littered the terminal with 15 different Stella adverts. This made it look as if Stella was sponsoring the tennis event. The ads had tennis themes, with slogans like “the top-seeded Belgian,” “your trophy awaits” and “a perfect match.” By Shané Schutte