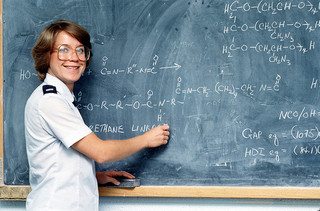 Although there is surely no single factor causing this gender disparity, it reflects a wider trend in our social consciousness. We have come to define some professions as male and others as female, yet this anachronistic subconscious mindset is a hindrance to innovation and workplace diversity—one that is fortunately changing, albeit slowly.

The history of women in engineering

One of the biggest historical boons for female engineers arrived during the Second World War. When men went off to fight, women filled their roles in the engineering industry. After the war, though female employment in the sector fell sharply, many women had been exposed to the work and many biases had been partially effaced. In the years since, workplace equality has made significant advances with the help of legislation and shifting cultural attitudes. In fact, woman today have more opportunities to pursue careers in engineering than ever before. Yet, as the statistics demonstrate, few in the UK are. Nonetheless, despite their relative rarity in the profession, many female engineers have risen to great prominence in recent years. Amongst them, Linda Cureton is a notable example. As the CIO of NASA, she holds one of the most sought-after positions in the field of science and technology. Meanwhile, another standout example can be found in Jen Fitzpatrick, who was one of Google’s first employees and currently holds the position of VP of engineering for Geo and Local. Then there is Sabrina Thompson, a safety engineer who has masters in Aerospace Engineering from Georgia Institute of Technology. Sabrina is an example of rule 01: to never give up. She grew up in a poor neighbourhood without the luxuries in life, but powered through and became the first in her family to educate herself at such a level and work with safety experts in a space flight center. But prominent female engineers are by no means a modern novelty. Figures like Marilyn Jorgensen Reece (who designed the iconic spiral I-10/I-405 highway interchange in California), Mary Walton (who pioneered smog reduction technology during the Industrial Revolution), and Hedy Lamarr (a famous 1940s actress who invented a frequency-hopping secret communication technology for the US Navy, which has since served as the basis for spread-spectrum technology used in Bluetooth and Wi-Fi networking) represent exemplary female engineering spanning many generations. Today, we live in a world that is increasingly engineered. The systems we live in, work with, and move through ultimately define our actions and shape our imaginations. So when demographic groups are under-represented in a field with such an important role in shaping our societal landscape, a disparity arises between those who design and those who use the built environment. The result is inefficiency. Yet this inefficiency is itself a vehicle of progress. More and more women today are being inspired by the inefficiencies they identify around them to join ranks with other engineers in the effort to design a better world.

Joining the force field with other female engineers

To join the industry women must overcome a number of social obstacles, the most notable of which is the prevalent attitude that engineering is work for men. I advise female engineers to be out-of-the-box thinkers who refuse to accept that tradition. Rule 01, never give up and do not accept defeat. Women pursuing jobs in engineering must be innovators—not only of the technologies they work on, but also of the ideas we thoughtlessly allow to propagate gender stereotypes. Rule 01 is simple, but it is also the essential basis of every attempt to innovate. Never stop trying. Accept failures as opportunities to learn and view them proudly as badges of progress. If you are a woman seeking success in a male-dominated industry, you inevitably face an uphill struggle. By following rule 01, however, you can never truly fail. You can only get closer to your goal with each attempt. On the more practical side of things, organisations like the Society of Women Engineers host events and conferences to provide guidance, training and support for those hoping to hone their skills and advance their careers. There are also countless online resources for prospective engineers, including everything from forums to online courses. Like most jobs, networking and resume building are essential for advancement in the engineering world so do not forget to build your portfolio. It helps to stand out as unique! For the next generation of engineers, if you are a woman with an inkling of a desire to become an engineer, start exploring your options today. We need more women in this exciting and socially significant sector, and your contribution will no-doubt be an important step in the right direction. Follow your dreams despite what anyone else tells you, and when times get tough, just remember rule 01! Jenny Beswick is a graduate of engineering and has experience working in different scientific fields of work. Her first step into science and engineering was through a telegraph engineering job and from there Jenny moved her experience to an international level and managed engineering projects on construction sites.  Image Source