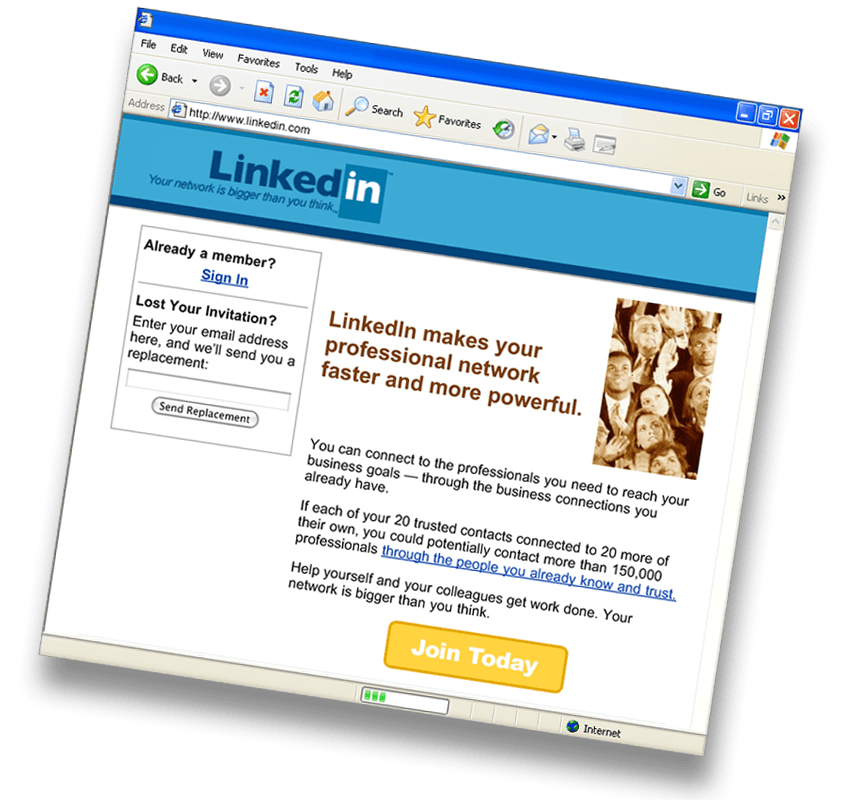 The boom of social networking has delivered an array of businesses, from Facebook to Twitter to Snapchat. There’s even London-centric newcomer AMBAM, which connects small local brands to consumers.

Of course, LinkedIn has secured a niche by targeting the professional marketplace – a quest that begun back in December 2002 when co-founder Reid Hoffman started up in his living room.

Having officially launched six months later on 5 May 2003, the service had acquired 4,500 users by the end of the month, though some days experienced as few as 20 sign-ups. Things changed for the company later in the year, when it picked up a $3.8m Series A round from Sequoia.

Fast-forwarding to the present day and LinkedIn’s growth is immediately recognisable with its Q1 2015 results, which revealed the firm now has 364m registered members and a 35 per cent annual revenue growth to hit $638m.

“Q1 was a solid quarter in which we made meaningful progress against our multi-year strategic roadmap,” said Jeff Weiner, CEO of LinkedIn. “During the quarter, we maintained steady growth in member engagement while achieving strong financial results.”

The firm was particularly keen to highlight the period also resulted in half of all visits being generated by mobiles, while it introduced new solutions to support richer publishing abilities and engagement.

The company also made its first billion-dollar acquisition with the $1.5bn takeover of education service lynda.com, which teaches skills to users through online videos.

“Imagine being a job seeker and being able to instantly know what skills are needed for the available jobs in a desired city, and then to be prompted to take the relevant and accredited course to help you acquire this skill,” Ryan Roslansky, head of global content products for LinkedIn, explained to detail the reason behind the buyout.

This demonstrates LinkedIn has gone far beyond simply serving as a 21st century address book and underscores the aim to be a one-stop shop for all things related to enterprise, whether that’s building contacts, securing training or finding work.

Online platform Hiring Hub is one such business to take advantage of the change to the way recruitment is handled in today’s world, having grown from revenue of zero in 2011 at launch to £1m in 2014. And with recruiters from 750 agencies able to log on and compete to fill openings as it suits them, the company expects revenue to triple this year.

Matt Singer, VP of marketing at recruitment technology business Jobvite believes LinkedIn has been transformative. “Today, LinkedIn is celebrating its twelfth birthday. The social network has played an important role in the creation of the modern job market, and looks to continue to do so as it heads into its teenage years,” he said.

“Originally, LinkedIn was a simple tool that allowed people a space to show off their CV, but in retrospect, it marked a turning point in the job market. Its ubiquitousness has become a signpost for a new, dynamic and, most importantly, social worker.  Gone are the days when recruitment was a secretive world of interactions between job seekers and recruiters. Instead, like other industries, it is now driven by engagement.

“LinkedIn has been one of the pillars of this digital revolution, empowering individuals with an unbelievable amount of options when it comes to finding work.  Additionally, resumes are now exposed via LinkedIn, completely transforming the job market by giving recruiters full visibility into the current talent pool. With the site soon to become a teenager, the social recruiting scene is only set to get bigger and more competitive.”

But while acknowledging its 12th anniversary, LinkedIn’s global corporate communications executive Shannon Stubo played down its numbers to instead celebrate by concentrating on its user base and company mission.

“Since the day I walked into the LinkedIn office in the summer of 2010, I felt a buzz in the air that was almost electric. I soon realised that energy was the passion of hundreds of employees working toward a common purpose – our vision of creating economic opportunity for every member of the global workforce,” she said.

“At LinkedIn, each day that our members move their careers forward in big or small ways, is considered a win for them. And a reason to celebrate. So today, on our 12th anniversary, we want to celebrate our members – and thank them – for being part of our journey. We’re inspired every single day by their accomplishments, ambition, optimism – and smarts.

“Over the years, I’ve heard countless stories of members who’ve transformed their careers and their lives through LinkedIn. We’re honoured to be a part of those stories.”

Perhaps the most impressive of stories was how blind recruiter David Hume hasn’t been held back by his disability, having worked in the industry for over 30 years.

View LinkedIn’s top 12 highlights in the presentation below.