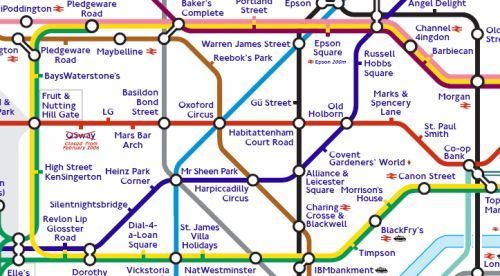 Rail fare prices have seen their tenth successive above-inflation annual rise. Fares have risen faster than wages since the recession in 2008.

It seems that train travel is in danger of becoming an unaffordable luxury for many people, especially those with low incomes. Millions of workers who rely on trains to get to work everyday, however, have no choice but to pay up and find themselves having to dig deeper into their pockets.

An unacceptable situation to many. Campaign for Better Transport CEO Stephen Joseph, for example, said: “The impact of successive government policies on rail fares is appalling. It’s truly shocking that we have deliberately made getting the train to work an extravagance that many struggle to afford. The time has come not just to stop the rises but to reduce fares.”

Enter the Tory idea that would see a ticket price freeze through sponsorship of the London Underground: Burberry by Bond Street, Virgin Euston and Harrod’s Knightbridge, for example.

This method has already been tested by Madrid transport authorities. Madrid’s metro line two, renamed “Line two Vodafone”, has recently been splashed in red paint to extend Vodafone’s global Red campaign. As part of the deal, mobile broadband was added to the line. Vodafone will pay Madrid’s metro operator £3m over three years to have its insignia on Madrid’s official Metro map, on platforms and inside trains. Maybe the company would be willing to sponsor our own red Central line

It is estimated that £136m a year could be raised through London tube sponsorship, sufficient enough to freeze fares for a whole year. Their vision includes an ambitious target of £204m, which would cap rises at inflation for three years.

As prices continue to rise, a poll by Gareth Bacon a conservative London Assembly member reveals that 82 per cent of commuters favoured tube sponsorship if it would further fare hikes.

?Why on earth, when we’re hard pressed financially in this country, should the fare-payer constantly have to keep dipping into their restricted pockets when there’s a gold mine that TFL are refusing to exploit,” Bacon said.

But why, if it will benefit passengers and the UK economy, is TFL so reluctant to sell out” After all, Emirates’s sponsorship of the Thames cable car system is worth £36m over ten years. Around 30,000 journeys are made on the cable car each week. Compare that to the 1.5m passengers who use London’s busiest stations every week.

Simply put, the tube, its lines and its stations are iconic, with a long history. It’s one of the UK’s greatest assets and contributes to Britain’s cultural heritage. Tampering with these names would remove all nostalgic connection.

Professor of consumer marketing at Cass Business School, Vince Mitchell believes that the main problem with this idea is where it might lead to. “Changing street names and areas to reduce council tax” Renaming lakes to reduce water rates” Sponsored hospitals to reduce our health costs” There is an economic argument for all of these, but would it turn the UK into one big trade fair” Great for companies maybe, but not great for tourism.