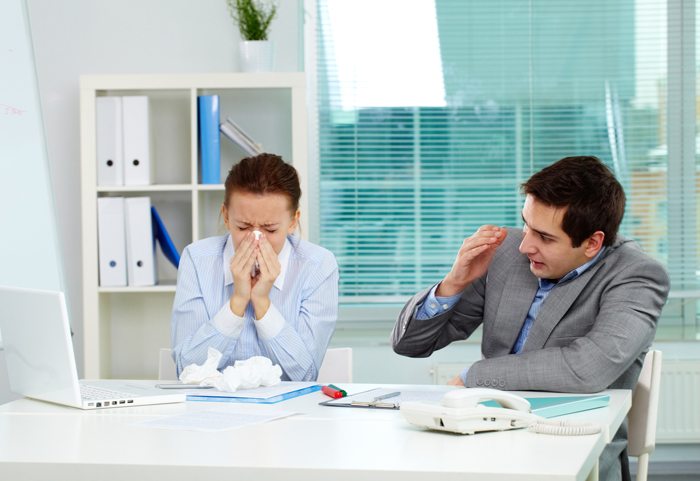 Share via
As part of our focus on health and wellbeing in the workplace, Real Business looks at the impact of absenteeism and presenteeism. When someone is absent from work, the remaining staff may take on the extra load. But when they come in to work sick, everyone is at risk of catching a cold ? which is worse? It will not come as a surprise to any business owners that an employee?s absence from work can be a disruption. According to a report by ERS Research and Consultancy, sickness absence costs UK businesses an estimated ?29bn annually with the average worker taking 6.6 days off each year. It can cause a range of problems: work doesn?t get done or remaining employees can get over-worked, there can be a drop-off in productivity, things can fall through the cracks. Despite the severity of the problem, only 91 per cent of firms track staff absences, with 39 per cent logging them on paper or in a spreadsheet, leaving it open to human error, according research commissioned by HR and payroll specialist Moorepay. This means businesses are failing to track the true picture of absenteeism. In addition, absences due to training, compassionate leave, medical appointments, sabbaticals and duvet days are only reviewed by 55 per cent, 51 per cent, 50 per cent, 28 per cent and 20 per cent respectively. Presenteeism isn?t any better Meanwhile, presenteeism can be almost as bad. This is when an employee comes in to work despite being too ill to be productive ? this often goes hand in hand with high-pressure workplaces where employees are stressed and feel obligated to come in. More than three-in-ten organisations reported an increase in people coming in to work ill in the past 12 months, according to ERS. Those who had noticed an increase in presenteeism are nearly twice as likely to report an increase in stress-related absence than those who hadn?t (64 per cent versus 35 per cent). Presenteeism is also much more likely to happen when workloads are piled high or if job security is threatened, and can be cut down with improved management practices. This can be bad news for the remaining employees as well ? even though they may not be asked to take on an extra share of the workload. Working in close conditions can mean your office becomes a petri dish for disease if the illness is contagious ? before you know if, half you staff could be struck ill. To make matters worse, presenteeism denies the employee time to recover, meaning the period of ill-health is generally stretched out. Working conditions can even exacerbate illnesses; according to research from Fellowes, UK employees are regularly suffering from backache (34 per cent), neck ache (25 per cent) and headaches (23 per cent) as a direct result of how they are working. Productivity takes a hit Overall, due to ill health, it is estimated that UK employers are losing 27.5 days of productive work per employee each health, according to research from Britain?s Healthiest Workplace (BHW). Commenting on the findings, Adrian Lewis, director of Activ Absence said: ?In our experience, absenteeism is exacerbated by poor absence management practices, and too many companies are still failing to track absence management?and in the dark about the extent of their absence issues, unable to identity and address issues early on.? ?People spend a great deal of time at work and employers are in a unique position to tackle these risk factors and develop appropriate wellbeing strategies that will encourage employees to become healthier, happier and more engaged.? For more information to help support the health and wellbeing of your employees please visit: