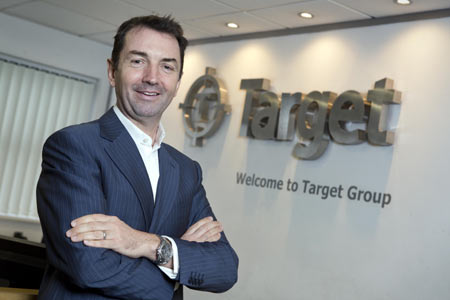 Originally from Dublin, Larkin spent three years as CFO at Virgin Money and four years at McKinse and attained a first class Degree in Chemical Engineering from University College Dublin, an INSEAD MBA.

Previously Larkin spent eight years at Lloyds Banking Group, with highlights being increasing Lloyds’ market share of new personal current accounts from nine per cent to 19 per cent. Later, as MD of Lloyds Consumer Banking, Larkin increased asset-based lending to Corporate and SME customers by 13 per cent while reducing costs by 13 per cent. His most recent leadership roles across Lloyds Banking Group was as MD of Lloyds Commercial Finance, where he led the end-to-end overhaul of the digital banking proposition and infrastructure across the Group.  ?The dynamic nature of invoice finance means it continues to grow in popularity and outperform the business funding market, with figures released last month by the trade body, ABFA stating that total advances grew by nine per cent year-on-year. The average turnover of clients using this flexible form of funding also outperformed the market, increasing by over 20 per cent from the same time last year. ?The fact that Lloyds TSB Commercial Finance?s products and services continue to go from strength to strength was one of the key reasons I wanted to join the team.? ? But in an environment of regulatory change and macroeconomic uncertainty financial services providers are looking to proven outsource partners to play an increasing role in their business model. And Target Group has always had a strong reputation in the financial services industry and recently it has really started moving up through the gears. ?Target has aggressive growth plans and has put an impressive infrastructure in place to achieve those aims.  has put an impressive infrastructure in place to achieve its aims,? said Larkin. “And I’ll admit that helping Target help its clients succeed is a major reason I have joined the firm and I look forward to contributing to the company?s next phase of expansion.? At the end of 2014, Target announced that it has gone live with its first acquisition of a secured loan portfolio. The acquisition forms part of Target?s ambitious growth strategy, and has been carried out in partnership with Arrow Global.  ?Having the adaptability to move into new areas of the market is a central part of our corporate strategy over the coming months, and the purchase of this portfolio comes at a very exciting time for us,? he said, which is undoubtedly one of the reasons why he was brought on board. And alongside his 20 years worth of financial services experience, Larkin will act as a Director of a number of the Group?s regulated companies, subject to FCA approval. By Shan? Schutte