“I was fortunate to be accompanying the PM David Cameron, Lord Green (minister for trade and investment) and Andrew Mitchell (secretary of state for international development) on a business delegation to Africa.

“It included CEOs of some of the UK’s leading blue-chip corporates plus a handful of SMEs (including Monitise and FrontlineSMS) and a 20-strong press pack of journalists who all boarded the chartered Virgin Atlantic jet on Sunday evening. First stop: Johannesburg.

“Landing at around 6am in Johannesburg, our first engagement was a breakfast briefing at the Sheraton Hotel in Pretoria. We arrive with 15 minutes to spare and piled into the spa/gym changing rooms to get into our suits and ready for the breakfast briefing with Rob Davies, the South African minister of trade and industry, on strengthening links between our nations.

“Briefing complete, next stop was the Union Buildings to meet President Zuma. We had arrived on a very special day – Nelson Mandela’s 93rd birthday. Celebrations were taking place outside the buildings and there was definitely an upbeat party atmosphere all around.

“Following a press conference with PM David Cameron and President Zuma (at which the media raised the inevitable questions on News International and the Libyan crisis), we were off to the Johannesburg Stock Exchange for a panel discussion and lunch with finance minister Pravin Gordhan.

“At this event, the PM stressed the fact that trade need not be a ‘zero-sum game’ and that both South African business and British business can truly benefit from doing business with each other. When a Daily Mail reporter tried to ask about the phone hacking issue once again, the audience jeered: it was clear that the South Africans didn’t want the focus of the trip to be derailed.

“The Prime Minister responded and then brought us back to the matter at hand – growth through entrepreneurship and an agreement that by 2015 bilateral trade between SA-UK must double. When asked by an audience member what the private sector in South Africa can do to bolster enterprise support, the PM mentioned StartUp Britain as an example of a private-sector led initiative to boost entrepreneurship.

“At around 3.30pm, we made our way to the airport to head to Lagos, Nigeria. At this point, we were informed on the flight that David Cameron had decided to cut short the visit and that we would be leaving Lagos early afternoon given the situation unfolding back home.

“Landing at 11pm that night, it was straight off to the hotel. The roads were all closed for our convoy, making sure we arrived in record time and were able to get some much-needed sleep.

“We had an early start on Tuesday morning with a briefing with UKTI Nigeria officials followed by an event with the governor of Lagos and governor of the Central Bank at the Pan African University (Lagos Business School). Here, the PM spoke of his admiration for the work being done to tackle corruption and strengthening of democratic processes in Nigeria. This was followed by lunch with President Goodluck Jonathan and his Cabinet officials at State House.

“The whole visit was extremely tightly choreographed. As soon as the formalities and speeches were done, it was back in the coaches and off to the airport for our flight back home.

“I left Nigeria with a very different impression than one I’d gone out with. With limited knowledge of the country and economy (my only experience being as a recipient of scam emails telling me I’d won obscene amounts of money), I left Nigeria with a sense of immense optimism. The newly elected Nigerian government officials made their intentions clear: aid will be invested in infrastructure projects, tackling corruption. Nigeria will very much be one of the major African economies to watch.

“There has been a lot of talk in the media about whether David Cameron was right to go to Africa given the News International debacle at home.

“My view: absolutely. I’m glad that the Real Business readers poll supports this (62 per cent of you agreed that promoting UK business should be his number-one priority).

“It is ludicrous to think that just because the Prime Minister is not in the country, he cannot continue to fulfil his duties remotely. Having a pack of 20 or so of the world’s top journalists following you around also makes sure you’re constantly pressed about the domestic issues surrounding Sir Paul Stephenson’s resignation and the so-called hackgate scandal.

“As an entrepreneur, I too didn’t stop my business activities just because I was in another country (I admit I’m semi-attached to my Blackberry).

“At a time when the UK economy is facing high levels of unemployment and bleak growth prospects, it’s essential that we send a signal to the world that British businesses are ready (and able) to trade with emerging economies.

“Africa presents a huge opportunity for UK businesses. It has six of the ten fastest growing economies in the world and is predicted to have the highest average GDP growth in the world over the next 40 years.

“We launched a microsite for South Africa a few days ago and very much hope to play a part in the burgeoning entrepreneurial African ecosystem.”

Rajeeb Dey is the co-founder of StartUp Britain and CEO of Enternships.com 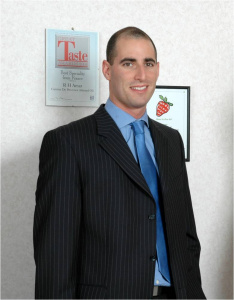