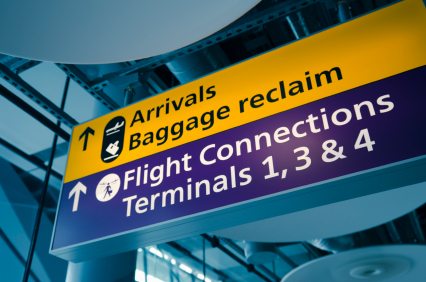 We really need to get our act together on this but currently, since last year, there’s a commission “working on it”, which isn’t expected to even get around to reporting its findings until 2015. What is it with airports and anything to do with flying in this country?

In Asia, they can build amazing new airport terminals in a matter of years when they want to, but for us there’s the inevitable 20 years of talking that needs to happen before breaking ground. It’s just the same when you want to go anywhere. Sure, there needs to be a lot of security these days, but even so – in the last ten flights I’ve taken, after the 90 minutes average it has taken to get through the airport to my plane, the damn thing has still ended up taking off 30 minutes late. It’s just not good enough. All we need to do is sit down and make some hard decisions. Expand Heathrow, or don’t. The same goes for Gatwick, or else build what has been branded “Boris Island”, or go with a combination of these, and throw in some more capacity at Luton and Stansted. It really doesn’t matter. Don’t think that as a London-based business man I’m only concerned about the Capital. This airport issue is a national, if not international one. Air travel has made the world a smaller place, which you would think is a great thing for business. But not for the business person who wants to fly from Newcastle to London after 8.15pm if they’ve had an evening meeting. We need to get the capacity there sometime soon; otherwise it just won’t be needed because our island will become a by-passed back-water with a few good castles to look at, rather than an important business destination. I’m with the committee insofar as we need to get the cards on the table, since judging by its make-up, some of those on it are already fixing for a protracted fight, against what they perceive will inevitably be recommendations they will feel obliged to oppose. Charlie Mullins is founder and CEO of Pimlico Plumbers.