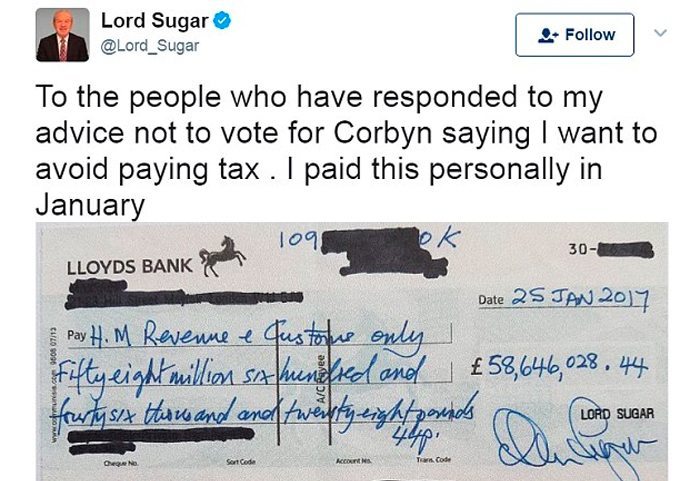 Share via
The businessman, who is well known for his role on BBC reality TV show The Apprentice, used to be a Labour voter before switching allegiances to the Conservatives and has recently faced criticism for seemingly wanting to pay less in his tax bill. His tweet read: “To the people who have responded to my advice not to vote for Corbyn saying I want to avoid paying tax. I paid this personally in January. Accompanying the statement was a picture of a cheque made out to HMRC and for the amount of nearly £59m. Sugar, who has an estimated net wealth of nearly £1.5bn, is a member of the House of Lords a position given to him by former prime minister Gordon Brown in 2009. Despite using a market pen to cover over the account details, within hours of posting his tax bill Sugar took the post down because individuals had used photo manipulation software to reveal the financial information he set out to obscure. In response to a tweet from @Shanelevitt11, which said: “I admire you lord sugar, but you also have to understand this current government cannot be backed. Its a mess (sic),” Sugar replied: ?Respectfully you can not be serious to place the UK in the hands of Corybn and the likes of idiots Abbot albeit he sussed she is useless (sic). During an interview with the Mail on Sunday, published on 3 June, Sugar described Corbyn as ?utterly useless” and someone who has ?promised the world with no thought about how to pay for it?. Having formerly been a Labour party member, donor and advisor to Tony Blair, Sugar has done a complete 180 degree turn in his criticism of the current Labour leader. In the same Mail on Sunday article, Sugar said: “You need entrepreneurs to build the economy of the country. But Corbyn’s lot view the Alan Sugars of this world as some kind of demons. They think there should not be people like me or Richard Branson in the world. Their view is like communism.