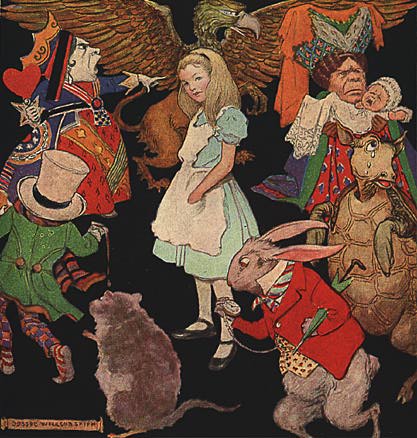 The cast in order of appearance:

One day in 2008, just as Alice was musing on what next to buy for her house, she saw a white rabbit rush past her, wearing a waistcoat and anxiously looking at his BlackBerry. She had never seen anything like that before and, overcome with curiosity, she followed it down a large rabbit hole, never once considering how she would get out again. Down, down, down she went. Would the fall never come to an end?  After what seemed like an eternity, she arrived in a curious hall with many locked doors. But how to find a way out? After much conflicting advice from a variety of experts who told her to drink this, eat that cake, don’t touch that fan, eat this side of a mushroom and not the other, she made her own way into a wonderland of talking mice, racing dodos and hookah-smoking caterpillars. But perhaps the strangest creature of all she came across was the Unicorn, who clearly regarded himself as the financial king of this wonderland.  “Do you know I always thought Unicorns were fabulous monsters. I never saw one alive before,” said Alice.  “Well, now we have seen each other,” said the Unicorn. “If you believe in me, I’ll believe in you.” Alice, fearing for her sanity, eventually came across something reassuringly familiar. A cat. Except this cat was a great big grinning Cheshire Cat, sitting on top of a tree.  “It would be nice if something made sense for a change,” said Alice to the Cat. “I don’t want to go among mad people.”  “Oh you can’t help that,” said the Cat. “We’re all mad here. I’m mad. You’re mad.”  “How do you know I’m mad?” said Alice.  “You must be,” said the Cat, “Or you wouldn’t have come here.” Rather than dwelling on this awkward subject for long, the Cheshire Cat directed Alice to the March Hare’s house so she could attend a tea party there with the Mad Hatter and his friends.  “Take some more tea,” the Mad Hatter said to Alice, very earnestly.  “I’ve had nothing yet,” replied Alice in an offended tone. “So I can’t take more.”  “You mean you can’t take less,” said the Hatter. “It’s very easy to take more than nothing.”  Alice declared it to be the stupidest tea party she had ever been to and quickly journeyed on to the Queen of Hearts’ croquet ground in the land of Belgium. The Queen was impatient for the game to begin. “Get to your places!” shouted the Queen in a voice of thunder, and people began running about in all directions, tumbling up against each other. However, they got settled down in a minute or two and the game began. The players all played at once without waiting turns, quarrelling all the while. Soon, the Queen was in a furious passion, and went stamping about, shouting: “Off with his head!” or “Off with her head!” about once a minute. Alice began to feel very uneasy. She had not, as yet, had any dispute with the Queen, but she knew it might happen any minute. “And then what would become of me?” she thought. “They are dreadfully fond of beheading people here. The great wonder is that there’s any one left alive.” “Sentence first, verdict afterwards,” said the Queen.  “But that’s impossible,” said Alice.  “I daresay you haven’t had much practice,” said the Queen. “When I was your age, I always practiced for half an hour a day. Why sometimes I believed six impossible things before breakfast. The rule here is jam tomorrow, and jam yesterday – but never jam today.” The Queen had very fixed views on how to govern her disparate subjects although it was obvious to Alice that the Unicorn and the March Hare had some other ideas. However, her remark to them that “if you drink too much from a bottle marked ‘poison’, it’s almost certain to disagree with you sooner or later” was ignored.  “What a pity,” thought Alice.