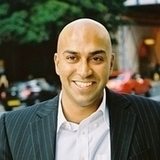 Share via
Amar Latif was diagnosed with the genetic eye condition retinitis pigmentosa when he was four years old. By the time he hit his twenties, he’d lost 95 per cent of his sight. But that didn’t stop him setting up his own business, Traveleyes – a tour operator specialising in group trips for both blind and sighted holidaymakers. Amar Latif tells Real Business why he’s “keeping it simple, stupid,” how he’s stopping entrepreneurialism from dying the same death as the 19th-century Shaker culture and how he’s beating the downturn.