Long-haul flights and sleepless nights don’t necessarily have to go hand-in-hand. At least that’s what the makers of Trtl, a new travel pillow, have to say. This scarf-like travel accessory is proving that travelling doesn’t have to be a pain in the neck.

We caught up with Michael Corrigan, one of the brains behind Trtl at Amazon Academy Glasgow this week to learn more about how this homegrown brand became a global travel staple.

This week, Amazon Academy kicked things off in Glasgow, where a panel of entrepreneurs discussed how Amazon Marketplace had helped their ideas take flight on the global stage.

One of these businesses was Trtl, a manufacturer of Trtl travel pillows, that helps you “sleep when you travel, be awake when you arrive”. We caught up with co-founder Michael Corrigan to learn more about his export story.

“The Trtl travel pillow is small and easy to carry when you travel, which is important, and it looks like a scarf so you can wear it as well,” Corrigan explained.

The business was born when Corrigan and his co-founder were studying mechanical engineering at Strathclyde University. The pair were trying to decide what to do with their lives and were inspired by an entrepreneur that came in to speak to their class.

“The following summer we applied for entrepreneurial boot camp. Being engineers we understood how to make things, but we didn’t know how to finance anything, we didn’t know about sales and marketing.

“I had gone on some inter-railing type trips through Europe, doing overnight trips in an upright position. Sleep is a fundamental part of life, everyone needs to do it and there’s nothing worse than when you’re in that position and you just want sleep and you can’t get in a position where you can get comfortable. We thought, surely, we can design something better, we’re engineers. We can use those skills to create a better solution.”

The pair tried a soft launch at a Christmas market in Edinburgh, where they handmade the products.

“We basically didn’t sleep for ten days, which was off brand!”

The pair sold 160 units in six days, which they found useful in terms of gaining consumer feedback. They made all their money back they spent on setting up the stall, and since then the business has grown quickly. In fact, Trtl recorded £7.9 million in sales last year.

That said, the business isn’t resting on its laurels.

“Trtl is a brand about sleeping when you travel to be awake when you arrive, so we will create products that fit in with that. We’re looking at launching a line of compression socks and doing it in a really different way with very interesting designs.”

During the panel at the Amazon Academy event, Corrigan explained that around 80% of Trtl’s sales come through export, which is something that the brand has really been able to drive on Amazon.

“Our first sale to an American customer was May 2015, and then maybe five or six weeks after that we were featured in the Huffington Post. We went from selling a few units a day to selling over a thousand units in ten hours, and the majority of that was in the US.

“We realised the opportunity of selling globally and it was actually quite easy to do that through ecommerce and Amazon.”

“I think one of the biggest benefits of Amazon is it’s a relatively simple interface to go and use to sell. You’ve got tremendous scale because so many people use it and therefore there’s an opportunity there.”

Stay tuned to Real Business to read about the other businesses on the Amazon Academy Panel; Second Nature, and Cheeky Panda. 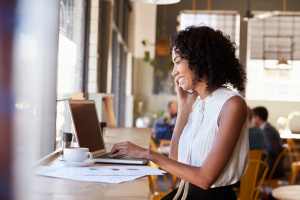 How to make mobile working work for you