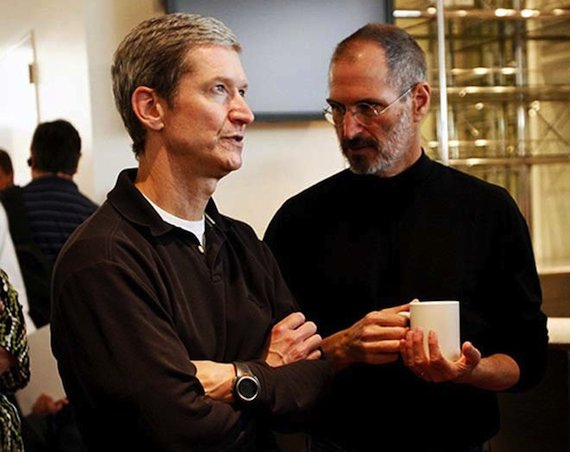 The tech giant’s chief executive made the comments during the commencement speech he delivered at George Washington University.

Apple has developed into the world’s biggest company, with a market value of over $700bn, and has taken steps to position itself as a socially conscious and ultimately sustainable brand. It recently announced a joint project with WWF in China to help protect forests that produce paper for its product packaging. Cook stressed this should be the norm rather than the exception. ?You don’t have to choose between doing good and doing well ? it’s a false choice today more than ever,? he said. ?At Apple, we believe that work should be about more than just improving your own self. It’s about improving the lives of others all over the world.? While Cook has been viewed as a more vocal philanthropist than his predecessor, he credited Jobs with instilling belief and aspiration in him. He said that Jobs was ?an idealist?, which reminded Cook of how he used to be as a teenager. Prior to meeting Jobs, Cook had got a degree in industrial engineering and admitted he had been ?trained to be pragmatic?. Jobs’ outlook made Cook ?question everything? and upended all his previous thoughts and preconceptions ?in the very best way?. From Jobs’ perspective, he thought that if they worked hard and made impressive products, they could help to change the world. ?Our products do amazing things, and just as Steve envisioned ? they empower people all over the world,? Cook said. Read more on corporate social responsibility: Technology and our increasing reliance on it has come in for criticism by many who fear the world is losing its ability to communicate face-to-face and the value of interaction in person. Cook though, listed a few examples where technology and Apple itself, has played a part in helping the world too.? ?People who are blind and need information read to them because they can’t see the screen. People for whom technology is a lifeline because they’re isolated by distance or disability. People who witness injustice and want to expose it. And now they can because they have a camera in their pocket all the time,? he announced to applause. The ubiquitous iPhone reached a landmark figure in 2014 ? with Apple announcing that 500m had been sold in its seven years of being sold. In March of 2015 this rose to 700m. Speaking to the Washington graduates, Cook also stressed the importance of keeping an ultimately optimistic and determined outlook in life in general. ?I suspect that some of you aren’t buying this. It’s no surprise that people are sceptical, when these days you have plenty of reason to be,? he said initially. A ?healthy dose of scepticism is fine but too often it turns to cynicism,? Cook added. He said there is a danger of viewing everything as suspicious ? where regardless of who is speaking and what they’re saying, their motives are questionable and their character suspect. ?It may just be the world we live in, but this is your world to change,? he summarised.? Ahead of his tips and guidance about succeeding as a person, as well as in business, Cook took a quick moment to joke too. When reminding the audience to switch off their phones before he started, Cook said: ?If you have an iPhone just switch it to silent. If you don’t have an iPhone, please pass it to the centre aisle ? Apple has a world-class recycling programme!? By Rebecca Smith