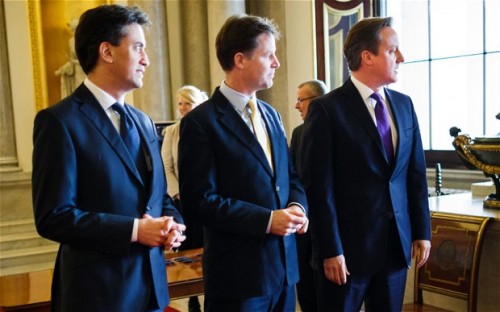 The FDs’ Satisfaction Survey, which will help determine the winners of the FDs’ Excellence Awards, held in association with ICAEW and supported by the CBI, has found that prime minister David Cameron holds most of the votes at 59.6 per cent. This comes hand-in-hand with the knowledge that the Conservative party overtook the Labour party yesterday for the first time since March 2012.

This was followed by the notion of a second coalition between the Conservatives and Liberal Democrats. In recent research it was stated that ?the percentage believing the coalition is a good thing for the country has reached a new high and that believing that it is a bad thing a new low. What may be happening is that while a majority are still against a second coalition, the approach of the election is concentrating minds a bit. For all the quarrels between the partners ? real and staged ? a substancial bloc of party members would presently be willing to give a deal with Nick Clegg’s party another go?.? Read more about the upcoming election: But in the FDs’ Satisfaction Survey, where on a ranking scale one was to ?completely disagree? and five was to be ?incredibly happy?, 51 per cent would be truly unhappy to see a Labour-Lib Dem coalition. In January, former Labour MP Peter Mandelson warned that ?Labour should prepare for a potential coalition with the Lib Dems?. ?Labour must not appear tribal or exclusive in its politics and it must not repeat its 2010 lack of preparation,? he said. ?It is not defeatist to consider the different scenarios in which we can get the Tories out.?Ed Miliband is an intelligent and adaptable person. If Labour is ahead on seats I am sure he will want to give it his best shot.? This now seems highly unlikely. The only other coalition to gain as much disdain was that of Labour-SNP, where the vast majority of FDs opted for ?totally disagree”. The FDs’ Satisfaction Survey will only be closing on 28 February, and there is still time to have your voice heard. By Shan? Schutte Image soure: Typewriter