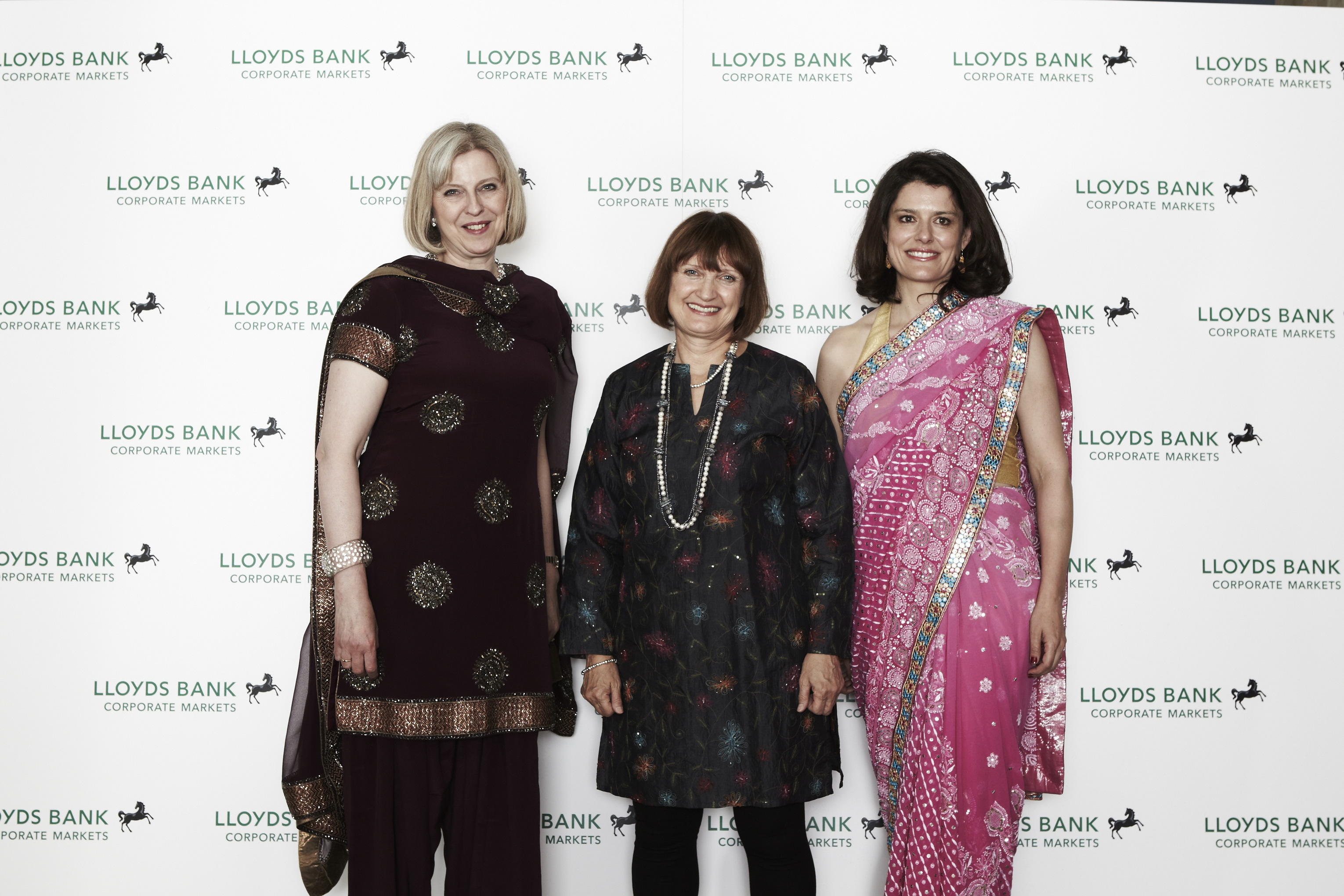 Share via
Last night’s ceremony, hosted by Real Business in association with Lloyds Bank Corporate Markets at the London Hilton on Park Lane, was compered by BBC presenter Riz Lateef. High-profile guests included Home Secretary Theresa May, The Rt Hon Tessa Jowell, wife of deputy prime minister, Miriam Clegg (so yes, all three political parties were represented!), serial entrepreneur James Caan, ITV newsreader Mary Nightingale, and executive producer of Bollywood smash West is West Shaana Diya. “Each of this year’s winners are a credit to the British Asian community and are an inspiration to the next generation of women,” said Pinky Lilani OBE, entrepreneur and founder of the award. “In 1999, when we started the Asian Women of Achievement Awards, a handful of Asian women enjoyed prominent positions in British life. Today, with Lord Davies’ report ringing in our ears, there is an unprecedented opportunity for Asian women to push for, and achieve, opportunities they may never have previously considered.”

The Arts and Culture Award

Anusha Subramanyam, director of Beeja Dance Company Anusha is a dancer, choreographer, teacher and dance movement therapist. In 2010, Anusha was presented with a UK New Choreography Award in recognition of the overwhelming potential of her innovative choreographic abilities. Business Woman of the Year – Noor Ali, ethnic buyer, AsdaNoor joined Asda in 2000 as a checkout operator. Within six months, she was promoted to an HR role at head office. From there, she’s gone from marketing to merchandising and eventually to trading, where she became an ethnic buyer. She has taken the ethnic range from a few lines to 15,000. Noor is also a member of EMAG (Ethnic Minority Advisory Group), lead mentor for Race for Opportunity and lead mentor for the Mosaic Group.

Entrepreneur of the Year

Kamal Basran, founder, The Authentic Food Company From helping her parents prepare samosas for the English pub they ran, to setting up her own food business in 1985, Kamal has always had a keen interest in ethnic food. Twenty-five years later, The Authentic Food Company has 230 employees, boasts a £31m turnover, and runs its own factory, supplying many of the UK’s hotels, pub chains, restaurants and retail outlets with quality international food.

Media Professionals of the Year

Ritula Shah, presenter, The World Tonight, BBC Radio 4  A self-confessed “anorak”, Ritula has been listening to Radio 4 ever since she can remember. After a spell in regional TV news, she joined the Today programme in 1991. Seven years and many night shifts later, Ritula made the short journey across London to Bush House, where she became one of the presenters of the daily news show The World Today. Ritula is now back at Radio 4 as a regular presenter of The World Tonight, Saturday PM and Woman’s Hour. Yasmin Diamond CB, director of communications, Home Office Having worked in both the public and private sectors, Yasmin is now responsible for the strategic development of all Home Office external and internal communications. She works directly with the Home Secretary, home office ministers and senior officials to develop and implement a communication strategy to deliver the departments objectives..

Professional of the Year

Dr Aisha K.Gill, senior lecturer in criminology, Roehampton University Aisha is a senior lecturer in Criminology at Roehampton University, specialising in health and criminal justice responses to violence against black, ethnic minority and refugee women in the UK. Aisha has also served numerous government working parties on “honour” killings and forced marriage, and written books on how victims of these atrocities experience the civil and criminal justice systems in the UK, India and Iraqi Kurdistan.

Khizra Dhindsa, detective inspector, West Midlands Police Detective inspector Khizra has a formidable nine year record with West Midlands Police. She has recently won regional policing accolades for her life-saving bravery, and been selected as Mosaic’s Community Leader of the Year for spearheading the hugely successful Matchbox Estate project, which slashed crime by 42 per cent.

Young Achiever of the Year

Shireen Irani, executive director, i-ProBono Shireen Irani is a UK qualified lawyer and founder of i-ProBono, a non-profit website connecting civil society organisations to lawyers and students who want to contribute to the public good. Prior to joining the legal profession, Shireen worked in the social sector in the UK, US and India.

Amerdeep Somal, commissioner, Independent Police Complaints Commission Amerdeep serves as IPCC commissioner for Derbyshire, Leicestershire and Northamptonshire police forces. She has received several awards for her work in tackling domestic violence, including one from the attorney general for confronting the particular challenges affecting Asian communities in dealing with domestic violence and for her commitment to diversity.  For information on the awards, check out: http://www.awaawards.com