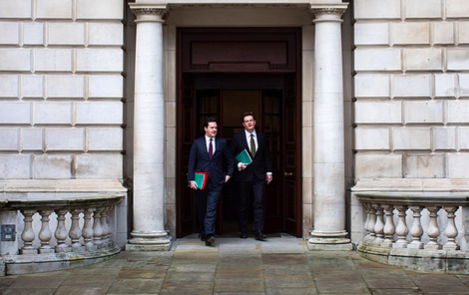 Fridays figures show public sector net borrowing fell 0.2bn year on year to 7.7bn in October. Its good, if not spectacular, news. However, a months strong performance doesnt disguise just how far we are from the governments target.

The release, which is the last update before the Autumn Statement, shows borrowing in the financial year to date is up 3.7bn on the same period in the previous year. This means the budget deficit in April-October was 51.1bn, compared to 50.6bn.

All that has happened despite positive increases in revenue generated by VAT, stamp duty and corporation tax which have so far boosted the treasurys coffers by an extra 4.7bn in the financial year to date.

What does this mean for the governments borrowing targets Unfortunately, chancellor George Osbornes got little-to-no chance of getting borrowing below 2013-2014 levels in the current financial year, in spite of the positive tone of the release.

Predictably, the chancellor and prime minister have started to amp up the rhetoric about the problems in the rest of the world in the wake of the bad news about their performance, telling us the red lights are flashing on the global economy .

That said, the cumulative pressure this recessions putting on the public purse is truly staggering. Total government debt has risen to 1,449.2bn about 55,000 per UK household compared to just under a trillion pounds when the collation was elected.

The problem is the way we talk about the deficit was created by this government. The need to get borrowing under control was a central plank of their economic policy and justified the harshest reductions in government spending in living memory.

In truth, Osbornes far from alone in running a deficit. Since Labour was in power in the late 70s, thereve only been six years when the UK government ran a surplus, 1988-89 under Thatcher and 1998-01 under Blair. As the OBRs assessment of the current performance notes:?

What impact will this have on the countries businesses First theres very little room for manoeuvre in the Autumn Statement. Any giveaway or new policy will have to be fiscally neutral and, having already savaged Whitehall budgets over the last four years, it’s going to be hard to get creative.

Further, as the BBCs economics editor pointed out, as an overspend if now almost certain to occur this year it implies any new government would have to immediately raise taxes or slash spending even more than is currently planned.