With industry groups and experts painting a negative picture about Brexit, it is no wonder business owners are feeling cautious. But let’s look at the reality. At the start of each month, economists make predictions for the path ahead, but the majority is proven wrong. The post-referendum recession hasn’t happened. Consumer spending hasn’t slipped. The global growth and strong Eurozone have negated immediate fears on the British manufacturing industry.

Business leaders can only plan based on facts. Essentially, no one knows what the end result will be – the government doesn’t know and neither do the experts. If they haven’t got a clue, how can a company base any decisions on an unknown outcome? Businesses currently have two choices. Either bosses sit on their hands and see what happens or take decisive action and take charge of their own future.

Business leaders work best when they only worry about what they can control. For most businesses in the UK there isn’t going to be a point in time where there is going to be a big step change when Brexit becomes reality. If anything, it’s just proving to be a fruitless distraction, and in the worst case an excuse.

A business is either growing or dying. There is no such thing as the “status quo.” The biggest risk of this “inbetweener,” Brexit inertia fuelled year is that many will use it to justify coasting. They think: “The economy isn’t growing, so how can we? As long as we stay the same and weather the storm, that’s fine.” But how will this making-do mind-set affect the company?

The culture of a company is a reflection of its leadership – the leaders behaviour, attitudes and decisions will always be reflected throughout the business. A negative and “play it safe” leader inhibited by Brexit inertia does not instil confidence. The sales staff will pick up on it and use it as an excuse for not hitting targets. Employees will feel demotivated and nervous about their job stability, which may prompt them to want to take charge of their own career destiny.

This will result in them looking around for other opportunities, and ultimately leaving their current employer. Here are some top on how to avoid the Brexit inertia and navigate the year ahead.

Lead from top: Communicate with staff that you have a robust plan. If you need to pivot some of the business model explain what will be done, the timeline and staff’s involvement. Prove that you act on what you say by following through. Good leaders move forward quickly and make fast decisions. Bad leaders procrastinate and can’t move forward.

Recruit intelligently: The recruitment pool is going to be smaller and many businesses are already seeing a drop in applications. The best and first approach must be on staff retention – make sure existing staff feel valued; talk to them about their development and satisfaction levels.

Don’t hold off on expanding and growing – but remember it’s best to promote internally and fill lower roles. If you do recruit European workers then you have a year’s run at planning around it and looking at other recruitment pools and changing your recruitment tactics. There is often an over reliance on experience – think about recruiting based on soft skills and hiring younger workers. Use this as an opportunity to fundamentally change your recruitment strategy.

Sales protection: The actual sales figures are an indication of what has happened not what is going to happen. Put in place the right leading indicators (e.g. new accounts we have opened, new contacts, new markets, new meetings) so that you get early notification of whether adjustments need to be made.

Stay strong on investment: Don’t hold back on investment and expansion decisions. Why would you stop investing in resources and employees? Having the best company and people gives you the foundation for growth – and scope to overtake competitors who are holding back and win their customers. Even if your market share isn’t growing then capitalise on other company’s inertia.

Plan for the future: Rather than living in a world mired by Brexit inertia, think about where you want to be in five years and how you will get there. Do not allow yourself to become blinkered and distracted by the short term. A common mistake by SME leaders is that they are over ambitious in the short term and downplay the long term – this results in failure and demotivation.

Have you heard of Buridan’s ass? Stefano Maifreni, founder and director of Eggcelerate, explains what the term means – and why it relates to Brexit. 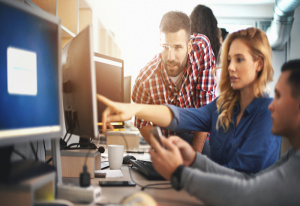