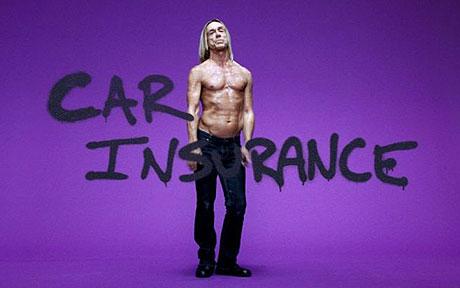 Share via
Which marketing agency did you use? MWO Who came up with the initial idea for the ads, you or the agency? The ad agency, MWO, came up with the idea. Whose idea was it to use Iggy Pop to front the campaign – and why the ageing punk rocker? The creative director at the ad agency came up with the idea of using Iggy Pop. He’s a well-known performer – widely documented as living his life to the full. We wanted to make the subject of car insurance a bit more lighthearted and fun – so we thought he would be a perfect choice for us. He was also an irreverent and surprising spokesperson to use.  What was your original brief to the agency? The brief was pretty open, to be honest. We wanted to allow for maximum creativity. The general brief: make our online-insurance brand famous and sell car insurance policies along the way.  How different was the end result to the original brief? We finessed, crafted and improved the idea through its development. But, fundamentally, the big idea stayed the same. Did you have to champion it internally? Yes. It was a very brave idea and a brave choice of celebrity, which can make people nervous.  Where was the ad shot? Miami, where Iggy Pop lives. Iggy has a very busy schedule so we had to work hard to make sure we got everything in one shoot. With meticulous planning, the team at MWO managed to get everything wrapped up with him in four days. How long did the process take from original idea to finished product? We wanted to get going with our advertising programme, so we pushed for a quick turnaround. From brief-writing to completion of the ads, we were ready to go on air in four months. With whom did you first roadtest the ad? We tested it with various focus groups involving motorists from across the UK. How much did you spend on the campaign? The third instalment of the Get a Life series (aired between January and March 2011), featuring Iggy and his sidekick alter-ego Little Iggy, cost £30m. In which countries were the ads shown? Swiftcover.com is a UK-only business so the ads were shown in domestic nations only. How many television viewers saw it? Around 39 million people saw the ad at least once. How many YouTube hits? To date, 233,000 people have viewed the ads on YouTube (figure quoted as of end of May 2011). What is the worst reaction you’ve had tothe campaign (and from whom)? The press called the adverts “misleading”, since our policy didn’t actually cover people working in the entertainment industry. There was a bit of a backlash – but that only helped to stir up debate about the ads. We quickly changed our policy so that now we’re pretty much the only insurer who does offer policies to musicians. How did you calculate the ROI on this campaign (and what was it)? Following the campaign, sales increased by more than one-third. To date, we’ve sold more than one million policies.  You know it’s all been worth it when… a) there are more than 100 pieces of print coverage in national, regional and trade media about your campaign, and b) People start creating their own spoof videos. Check out the one below. Frances Brindle, director of marketing at the British Library, reckons Swiftcover’s Iggy Pop TV advertising campaign is one of the worst she’s seen. Do you agree? Post your comments below.