After mentoring over a thousand aspiring and practising entrepreneurs, you start to notice a number of misapprehensions about what the craft of entrepreneurship involves. Here, these are presented as myths – but with a twist of truth to them.

Myth 1. You have to be amoral

I hear this a lot. “It’s a jungle out there”. “You can’t afford scruples”. I try and steer people away from this line of argument. The marketplace is competitive, but it is populated by one’s fellow human beings. Trust is an essential part of business, and if you get a reputation for cheating, backstabbing or lying, that will seriously damage your chances of success.

There are four cardinal rules I suggest that entrepreneurs follow. The first is the old “golden rule”: treat others as you would like them to treat you.

The second is to tell the truth. The temptation to stretch the truth can be strong, but in any kind of relationship-based business, deceit rarely pays in the long run. You can rip people off – once.

The third is to help others where possible. This attitude informs good sales: “How can I help?” is a magic sales question. Fourthly, I discourage people from dissing the opposition. It sounds negative. Concentrate on how good you are, instead.

The grain of truth? I never advocate amorality, but sometimes you have to be ruthless. This is often most difficult with co-workers, for example someone who was with you from the beginning but is no longer pulling their weight. They have to go!

This is the kind of flip side of the myth above. Entrepreneurs are often presented as saviours of the modern age. They change the world, more so than most politicians or media commentators (or even writers!) Aren’t they the shining role models for the next generation?

I have my doubts. Arguably politicians and writers shouldn’t be, either, but we’re talking about entrepreneurs here. Hugely admirable in some ways, they can also be arrogant, manipulative and petulant. They can be poor completer/ finishers. The wise ones understand this, and keep their weaknesses in check. The unwise ones don’t, and business often suffers as a result.

We are all familiar with the small business run by an autocrat. It has a high turnover of staff, except for a kernel of loyalists. Such businesses can muddle along, but it’s not a very jolly experience for anyone involved, and they never seem to make much progress. By contrast, great entrepreneurs hire great people, who will stand up to them when they “lose it”, and listen to them.

The grain of truth? Well, you are a hero. But don’t let it go to your head, otherwise you can come toppling off that plinth very quickly.

Most people over 40 have to get their kids to help with the latest piece of technology. How can they ever hope to compete in today’s markets, where things are changing at a seemingly exponential pace?

The answer turns out to be “extremely well”. Research presented in Forbes magazine shows that your mid 30s to your mid 40s are the best time to start a business. If there is a difference, it is the later starters who are better at founding high-growth businesses.

By that time you understand an industry and a sector. You have a range of contacts (business is about people!) You have seen companies and fads come and go. Many people have started even later than this and succeeded. Ray Kroc was 52 when he went into the restaurant business with two brothers from San Bernadino called MacDonald.

The grain of truth? Younger entrepreneurs seem to have the advantage in newly-emerging sectors. Bill Gates and Steve Jobs in personal computing. Mark Zuckerberg in social media. These billionaires skew the public’s perception of entrepreneurs.

Also, some people are entrepreneurs from birth. They sell sweets in the school playground. If this is you, don’t hang around corporate-land till you’re 40.

Myth 4. You have to quit your day job

Some people combine entrepreneurial activity with the security of continued employment. More companies are accepting that employees might have a side hustle on the go. The more traditional intrapreneur is alive and well, too.

The intrapreneur uses their initiative to create new products or markets within existing company structures. They have to be politically shrewd: if entrepreneurs need mentors (they do), intrapreneurs need sponsors, senior figures in the company who look after them, even more.

They need charm to win other allies around the company. They need those other entrepreneur virtues of resilience, self-belief, energy and vision, too. As smart intrapreneurs they can enjoy exercising these virtues without having to ditch the security of employment.

The grain of truth? If you want to make it big, then a ‘side hustle’ or an in-house enterprise won’t be enough in the end.

5. It’s all about growth

Entrepreneurship is often seen as the creation of huge organisations. But many people are happy to run small ones, and not to grow.

Businesses change their nature once you get beyond the founding team, and change even more once you start taking on more than about 20 people.

The grain of truth? Sometimes the market won’t let you stay small. My own company faced that dilemma. Customers told us that either we grew or they’d have to take their business elsewhere. Business became a lot less fun after that – but of course there was a nice trade sale at the end.

Mike Southon and Chris West are authors of The Beermat Entrepreneur, published by Pearson, available now. 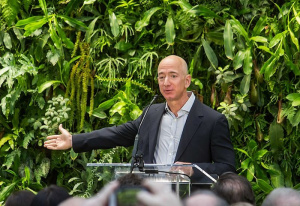 Jeff Bezos hates PowerPoint, and you should too if you like a motivated workforce