Traditionally, London has been regarded as the centre of the UK’s angel investment and startup ecosystem. However, it is impossible to ignore that the best regions to invest in are outside the capital.

Throughout my years as an investor in British business, I have worked with a number of companies based outside of London, one of which – wedding retailer Wed2B – operates in several regional cities and medium-sized towns across the UK. So why do I suggest the best regions to invest lie beyond London?

It comes down to a few simple reasons; the lower cost of doing business, enormous talent pool, and the significant growth opportunity.

London is, and always has been, an expensive place for both investors and entrepreneurs. Yes, the gains to be had can be great, but for most, the cost of starting and growing a business in the capital is prohibitive.

Outside of London, business expenses are reduced across the board; everything from initial investment and commercial property prices, to overheads and company wages.

Regional markets including the North East, the South West and Yorkshire and Humber have shown growth in commercial property activity, a sure sign of a growing business environment with an increasingly positive outlook, making them one of the best regions to invest in. Building a workforce, free of soaring London living costs, will in turn be cheaper to employ – and no doubt happier with the favourable cost of living outside the capital.

Many of those employees will be highly skilled university graduates, more and more of whom are choosing to stay outside of the capital, rather than endure the high prices and lower quality of life in London, despite the allure of a more concentrated job market. Others will be skilled workers leaving their busy London lives behind, some perhaps returning to their homes as part of the so-called “ripple effect“.

This is all good news for those looking to set up a business in the UK’s regional cities that will need skilled individuals to get their company off the ground, or expand further.

In its latest Tech Nation report, it was reported that 68 per cent of the UK’s digital tech investment was made in businesses outside of the capital. In fact, London falls outside the top five UK tech clusters by density of tech businesses. And there is more yet to be had.

According to the CBI’s Unlocking Regional Growth report, there is a total of £208bn worth of revenue that could be added to the UK economy, if businesses and government work together to improve productivity. Domestic growth initiatives, such as the £2.6bn investment from the Regional Growth Fund (RGF) launched in 2010, combined with a post-Brexit depressed pound attracting foreign investors, means the future is bright for both business and investors.

I invest in businesses for the long-term. I like building and nurturing companies, getting returns over a long period of time from a growing business, not from a quick turnaround and sale. Many entrepreneurs, including Luke Johnson and Nick Sturge, speak of their increasing awareness of how businesses support local communities and create long-term opportunities and wealth.

Indeed, I am aware one of the driving forces behind the strong Brexit vote in many parts of England, specifically, was spurred by a feeling of alienation from those who are perceived as running the country and its economy, as much as it was a protest against the EU.

Wedding retailer Wed2B is just one of a number of businesses that I have invested in outside the capital. It is one of the fastest-growing retailers in the UK and we are proud to employ more than 250 people across the country from Scotland to the southwest, up from 34 in 2014. The business is succeeding for all the reasons mentioned above: talented workers, a broad consumer client base, untapped retail opportunity, and cost-effective overheads such as rent.

The brand now operates 27 stores in diverse locations the length of the UK, including Glasgow, Rotherham, Wrexham and Exeter. The business is headquartered in Milton Keynes.

I have also invested in a large family hotel complex between Oxford and Birmingham, and am actively looking at more opportunities in this sector. Investors and entrepreneurs alike would be foolish not to take advantage of the potential for growth in retail, hospitality, and other sectors outside of the capital. The best regions to invest in lie outside the capital – it’s no longer all about London.

Javad Marandi is a British investor and entrepreneur 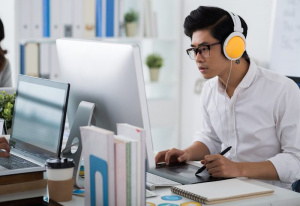 Songs that will enhance your performance at work