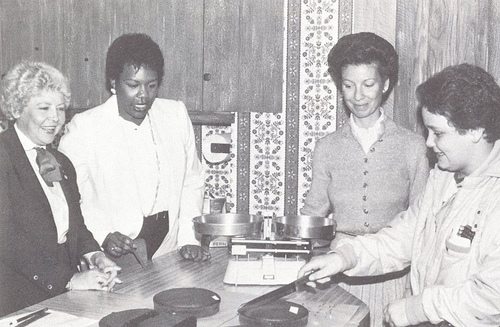 Take, for example, General Mill’s advertising directorSam Gale, who in the 20s created an ad which featured a puzzle, for which contestants could win a pincushion in the shape of a sack of flour. What he didn’t expect, however, was the many baking and cooking questions which came with the puzzle answers, like ‘how do I make my pancakes more fluffy’, and ‘why won’t my cake rise ‘

But Gale was convinced that no woman at that time would take advice from a man both founders of General Mill were male so he started answering the questions under the name of his invention: the kindly old “Betty Crocker”. They soon hired a team of experienced cooks who would answer every letter that was addressed to this senile entity. Crocker’ssignature was chosen by samples submitted by female employees, and when it came to the radio show, various women would play her part, all of whom read a script made by the company. Before they knew it, she had become the second best-known woman in America, after Eleanor Roosevelt. Susan Marks, author of ‘Finding Betty Crocker: The Secret Life of Americas First Lady of Food‘, believes Crocker’s success all comes down to being there at the right time for the right people. She says: We like the idea of this all-knowing grandmother figure who can help us whenever we have a question. “Were too savvy now about these sort of things, so it would be impossible to create a character like her today. But with Betty, we still want to hold on to this nostalgic memory, even if it’s not from our era. Image source

Carolyn Keene is still considered one of the most popular authors in history, having sold more than 100m copies of Nancy Drew. Keene was even profiled and invited to join the Authors Guild. However, no one seemed to notice when she kept writing bestsellers beyond age one-hundred – in fact, no one seemed to notice that Keene never existed. How was she invented Nancy Drew, a female, teenage Sherlock Holmes, was created by Edward Stratemeyer, the founder of publishing company The Syndicate, and he began with just a few pages of plot. But he was a traditionalist when it came to a female’s role in society. This was only nine years after females had been given the right to vote, and girls were craving to have the independence and intelligence of Nancy. Unlike his previous books, which featured domestic women, he needed to pitch this new heroine to a new target audience, desirous of an independent female protagonist. So he hired ghostwriters to write manuscripts for the Nancy Drew books, all under the name of “Carolyn Keene”. The fact that Keene wasn’t just one person – and not a woman – only came to light because the company started threatening the writers to keep its ‘business secrets’. They were even asked to sign secrecy contracts. Image source

Impressed by these marketing stunts “Aunt Jemima” is not real, either. The inspiration for her character came from a Billy Kersands song called ‘Old Aunt Jemima’ in a minstrel show. The actor, a white male reportedly from Germany, was such a prominent figure in the show that the founders of the originally named ‘self-raising pancake flour’ adopted the persona to represent their brand. They were convinced that such a highly publicised character would work better for the product and it did. After they hired former slave Nancy Green to become the spokesperson for their pancake mix in 1890, and had her serve pancakes from a booth that looked like a flour barrel, it spurred thousands of orders from several companies. After Green’s death, no one portrayed Aunt Jemima for ten years until Anna Robinson in 1933. Despite being a total fiction, Jemima received the Key to the City of Albion, Michigan, in 1964; and the actress meant to be Jemima visited the city many times for fundraisers.

While the list of fictional characters used for branding may not be overlong, the success of these characters – and how little known their true identities were – shows how effective these stunts are. Reading the needs of their market effectively, these companies created characters their consumers could identify with and, more importantly, trust.