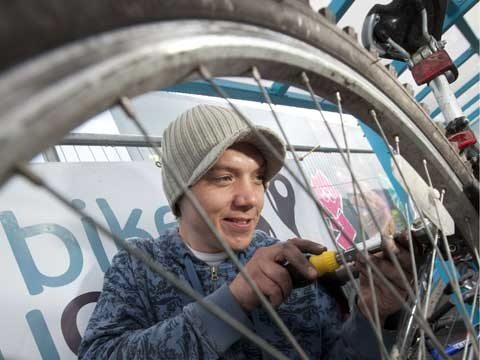 Mission: Tackling economic, social and environmental problems in East London If the social enterprise movement had a symbol, it would be the bicycle. Zero carbon emissions, free to use, durable and fun to ride, bikes are the ultimate social equaliser. So it’s not surprising a social enterprise, dedicated to a multitude of goals, is set in a bike shop. Dave Miller and Jim Blakemore founded Bikeworks in 2007 and it is already being hailed as one of the most productive and imaginative social enterprises in the country. Bikeworks is located in the heart of London’s economically deprived East End. The basic concept is to take on the homeless and long-term jobless and teach them to service and sell bikes. Some will go on to find work in London’s thriving bike retail trade; most will simply build the confidence needed to search for employment. This year around 50 will graduate. Being a creative thinker, Miller has added a plethora of other services. Children come to Bikeworks to learn about bike safety. Enthusiasts can sign up for a ten-day intensive course. There are bikes for hire, a service increasingly in-demand as the area is developed for the Olympics. Bikeworks’ Cycling for Health programme organises bike rides for at-risk groups such as the obese, or people with mental health problems. Local businesses can access a fleet of serviced bikes for employees. City firms such as Lloyds of London send employees to Bikeworks to see how social enterprise can work in practice. Social enterprises talk about the “triple bottom line”. Bikeworks, a not-for-profit CIC enterprise, effortlessly trumps this by contributing to around a dozen good causes. “We are opening up a second Bikeworks in Chelsea,” he says, speaking from home (where, ironically, he is recuperating after a crash – “I think I went into the back of a cab”). He adds: “The aim is to open half a dozen workshops around London, then maybe think about franchising nationwide.” Read the full feature on social entrepreneurs:   Read our profiles of the other new social entrepreneurs: One Water Holts Academy Shiply New Model School Company Unpackaged Media for Development Brighter Future Workshop JustGiving Women Like Us Pants to Poverty Spruce Carpets