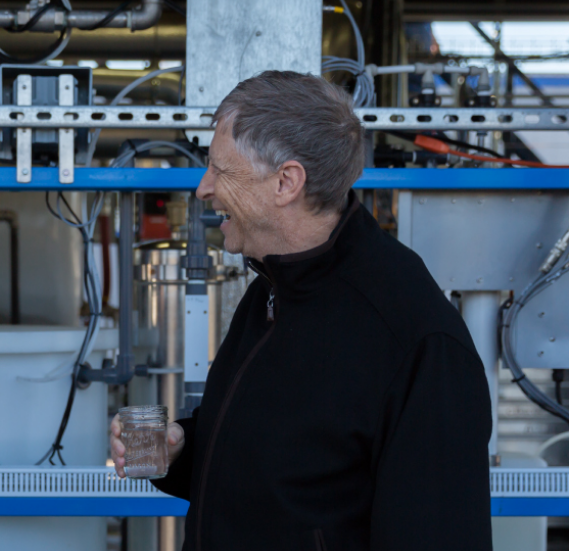 He’s the founder of Microsoft, worth a reported $81.1bn and is keen to use his wealth for the better of mankind, which he now believes can be achieved with the power of poo.

The businessman’s latest project is designed to transform waste products into drinking water through a special filtering process, ultimately eliminating the suffering of around two billion people who endure poor sanitation in developing countries each year, which kills 700,000 children a annually as a result of diseases.

Proving his thirst for knowledge and support of the project, Gates swigged a glass of the newly transformed liquid.

It’s almost the opposite of Coca-Cola’s UK Dasani water launch, which was met with criticism after being discovered the product was no more than filtered tap water that was linked to harmful chemicals.

Check out the video below to see the treating process at work.

Gates continued: Western toilets arent the answer, because they require a massive infrastructure of sewer lines and treatment plants that just isnt feasible in many poor countries. If we get it right, it will be a good example of how philanthropy can provide seed money that draws bright people to work on big problems, eventually creating a self-supporting industry.

Our foundation is funding Janicki to do the development. Its really amazing to see how theyve embraced the work; founder Peter and his family have travelled to Africa and India multiple times so they can see the scope of the problem. Our goal is to make the processors cheap enough that entrepreneurs in low and middle-income countries will want to invest in them and then start profitable waste treatment businesses.

The next step is the pilot project; later this year, Janicki will set up an Omniprocessor in Dakar, Senegal, where theyll study everything from how you connect with the local community to how you pick the most convenient location. They will also test one of the coolest things I saw on my tour: a system of sensors and webcams that will let Janickis engineers control the processor remotely and communicate with the team in Dakar so they can diagnose any problems that come up.

If things go well in Senegal, well start looking for partners in the developing world. For example I think it could be a great fit in India, where there are lots of entrepreneurs who could own and operate the processors, as well as companies with the skill to manufacture many of the parts.