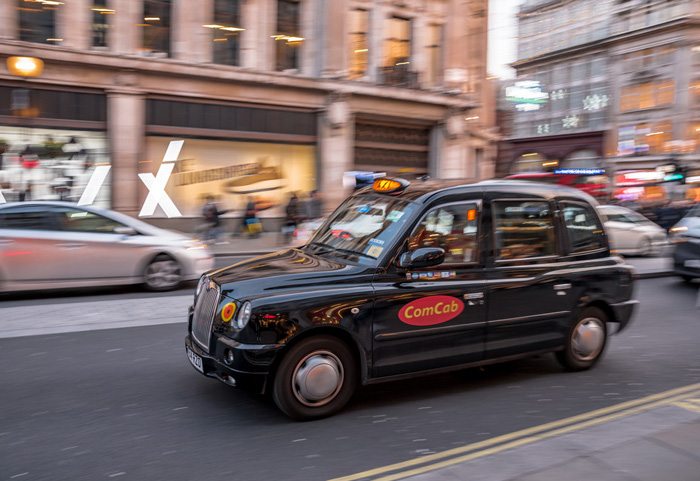 Share via
I’m all for disruptor businesses. A fresh injection of competition that keeps the established, like black cab drivers, on their toes – while giving customers a wide choice is never a bad thing. Of all the disruptors in the world, one of the most prominent has to be Uber. It’s become the biggest cab company in the world without owning one vehicle. That in itself is impressive, but, of course, whenever Uber is discussed, so is the impact it’s had on the iconic London black cab industry. The influx of Uber drivers on the capital has threatened the livelihood of the black cab drivers. The last year has seen strikes and crowdfunding campaigns led by a group of cabbies looking for a judicial review of the licence Transport for London granted in 2012 for Uber and its drivers. But, whatever the whys and wherefores of the argument, it has given the black cab industry a kick up the proverbial to improve its service in the face of competition. Black cabs are as synonymous with London as Big Ben or Buckingham Palace – but perhaps iconic status breeds complacency. I’m a huge supporter of the black cabs, but I’m also among the first to highlight their shortcomings. But they are making changes. From autumn, the new electric taxis will be on the streets of London – making black cabs the greenest form of public transport available. And, without doubt, the black cab experience has improved since Uber drove into town. Cabbies know they have to make the extra effort, which includes their customer service and the cleanliness of their vehicles. However, for all their efforts, it seems that City Hall has found another way to hit cabbies in the pocket by proposing the pedestrianisation of Oxford Street – essentially banning black cab drivers from one of London’s busiest shopping street. The mayor, Sadiq Khan, must be living in a fool’s paradise if he thinks it’s a good idea to do this in a street where black cabs are the choice of travel of thousands of Londoners and tourists alike taking them from store to their door. There seems to be no thought given to how it might impact the cab industry or the wider economy. Restricting black taxi access to Oxford Street will start a ripple effect and have unimagined, knock-on, financial ramifications for businesses. Wealthy shoppers and tourists will just take their bread and honey to other places that they have easier access to rather than hitting the shops of Oxford Street – where jumping in the back of a black cab is all part of the London experience. On another practical note it will make things a lot tougher for the disabled and the elderly, who rely on a door-to-door service, and those not wanting to battle the crowds on the London Underground or the buses. It’s outrageous that the mayor is happy to steal this freedom from them. So just as it appears the black cab industry has taken positive action to counter the insurgent app-based cab firms that have parked their cars on their lawns, they’re given another kick in the teeth by the very people that are supposed to celebrate all that’s good about London. And that includes our black cabs. I can’t see what Khan will gain from this. In fact, all I can see is a list of losses as long as the taxi line outside Waterloo station.

If you’re a fan of London’s iconic carriages then check out our exciting video series – Black Cab Entrepreneurs – where we drive around the capital interviewing fascinating business owners.