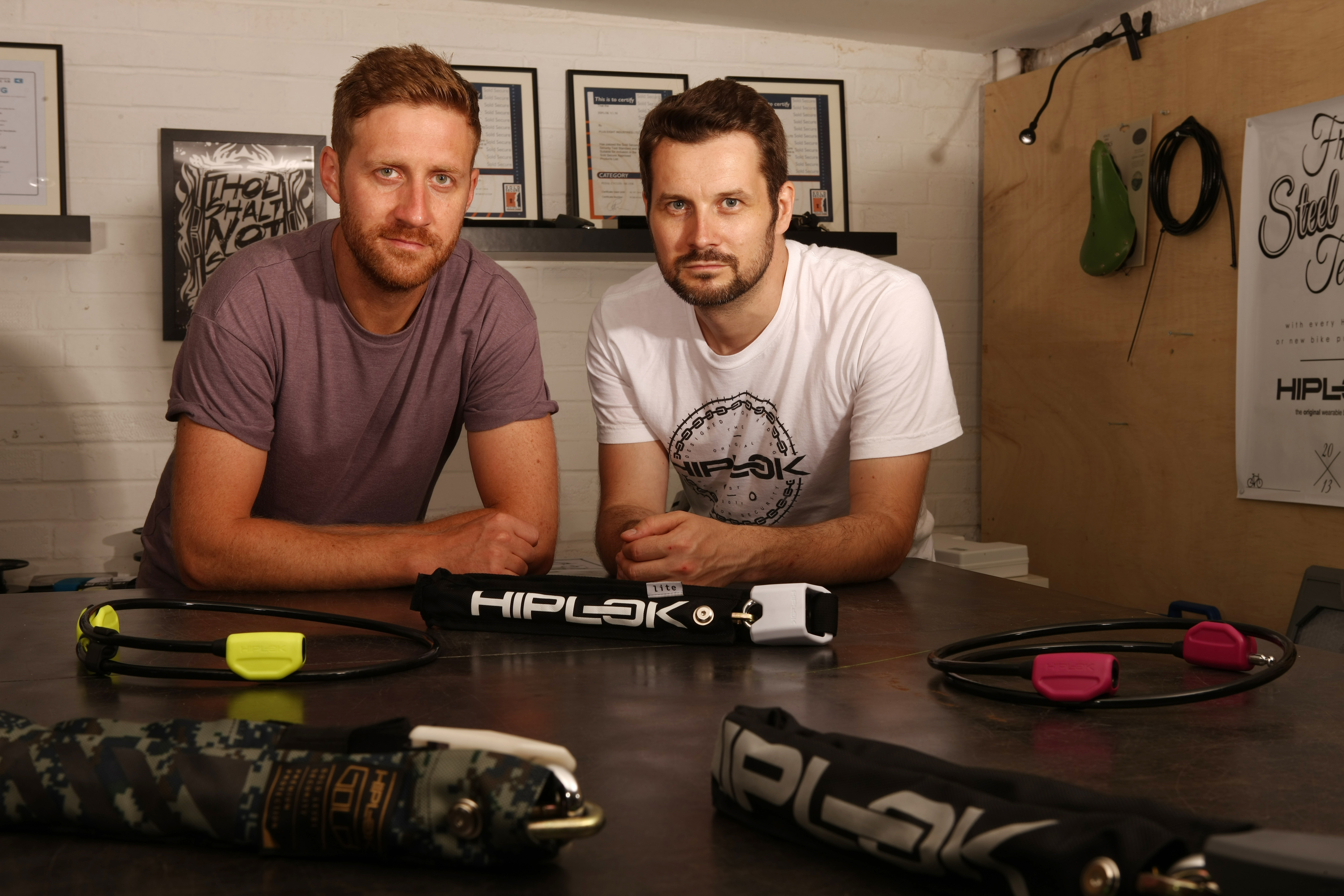 The Hiplok story is one that includes some early innovation, utilisation of contacts, clever marketing and brand appeal ? all backed up by a rise in popularity of urban cycling that is impossible to ignore.

As friends at Coventry University doing industrial design, Smith and Abrahams spent their student days throwing ideas around but ultimately went different ways when the course ended. Staying in touch, one went into the sports and cycling industry while the other took up a role at a product design consultancy. Abrahams traces the origin of the business back to when his bike was nicked ? mainly due to the fact that he hadn?t bothered to take a lock because of its inconvenience. With Smith on the other side of the Atlantic living in Los Angeles, the duo?s early product discussions took place over Skype. At that stage Smith was working for heritage bike brand Brooks, part of the company?s ?rebirth? ? as he described it. From an understanding of the market derived from that role, he saw on opportunity in a sector that had become ?staid and boring?.

Shaking up that dull bicycle security space, Hiplok now produces a range of bike locks designed to be worn around a cyclist’s waist. The locks, unlike traditional ones, bring colour into the equation and feature reflective strips to help with safety. It says a lot that both Smith and Abrahams were six months into selling the first product before quitting their jobs ? many a long night and working weekend helping ? before realising the only way to make the business work properly was to go full time.

Abrahams had already experienced his 15 minutes of fame (of sorts) as one of the product design experts roped into helping clueless candidates on BBC?s The Apprentice come up with a new product seemingly overnight. ?In terms of designing and developing a product it was so far away from reality it was untrue,? he explained. ?We were allowed to help them if they asked specific questions, but couldn?t pick out faults so it wasn?t a realistic representation of classic product development.? While neither Smith or Abrahams had any experience in starting or growing their own business, they did have years of knowledge when it came to product ? namely working through the prototype stage and getting it market ready. ?We had a prototype resource in the company I worked for, someone we could tap into. The other big thing was that we tried to keep the product as simple as possible ? so the chain was a standard bought off the shelf part and then we developed the sleeve and housing for the buckle,” Abrahams said. Read more about cycling and business: Another resource that has proved invaluable to the Hiplok boys was connections to Chinese manufacturers. While initially hoping that they?d have a made in Britain product, margins quickly put pay to that and the two needed to find an overseas maker. Trust was another important component when it came to finding a good partner, as Smith revealed. ?We didn?t want to find a company that made bike locks for others as keeping the product a secret up until launch was important.? The Chinese link that originated from Abraham?s previous employer has served that role well ? so well in fact that Hiplok is now shipping to 25 countries.

Looking back at what has allowed them to get where they are now, Smith is blunt when he declares ?we are not sales guys ? we can?t sell ice to eskimos.? ?When we started out we brought on an investor who now sits on the board. He?s been there, done that, and been CEO or chairman at big brands. He?s great on the big pictures stuff. ? Smith added. Getting the first product right was critical, Smith urged ? a process facilitated by doing extensive consumer research. ?Although we are quite bolshie, that kind of thing is hugely important. You only have to watch an episode of Dragons? Den to see people who think they have a great product when that?s not the case.? Like fellow urban cycling brand Blaze, which has produced a new and innovative cycling light, Hiplok sees itself long term as a business providing solutions to not only cycling issues but also wider situations. But for now the figures are good. Sales during 2014, at ?570,000, were 40 per cent up on 2013 and the founders have recently confirmed new deals with two ?big? US distribution companies. QBP, the biggest in the US they say, and Cyclone Distribution will help fuel the very lucrative American market ? all the result of Smith and Abraham taking their own stand at Inter Bike (a big cycling show) in Las Vegas last year. ?The US is a huge potential market, but is very fragmented. So we?ve been working with quite a small distributor for the last few years,? explained Smith. ?With the two new distributors, we?ve now got high hopes and are excited about getting started.? Coming back to Smith and Abraham?s desire to shake up a ?staid and boring? part of the cycling space, Hiplok was the only security brand sold at Evans (cycling retail chain) last year to experience growth. With their products set to be in over 400 Halfords locations by March, that California dreaming video must seem like an eternity ago for these cycling entrepreneurs. By Hunter Ruthven