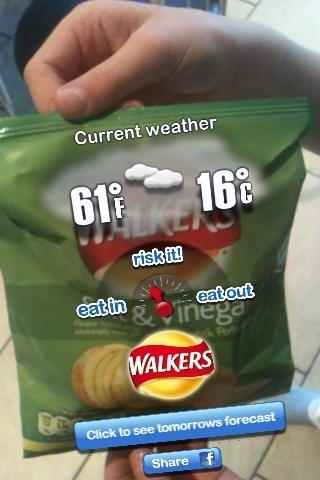 Its CMO and co-founder Jess Butcher says that one of the most important decisions the company has made was “to stay true to [their] single platform (The Blippar app) and single verb (to ‘blip’) proposition in spite of being offered lucrative opportunities to build our technology into other applications and white label it for the market.”

To achieve the “mass adoption” they have accomplished thus far, Butcher explains that the company is in “constant brainstorm mode.” And they have a lot to show for it with a current 5m users worldwide and 750 brands and publishers on the platform. But to compete against the likes of Oculus VR headgear makers and Meta, Blippar has stepped things up a notch this year. Moving away from mobile applications, the company has shifted into wearable tech – Google Glass to be exact. That’s right, Blippar has become the first company to bring real-time image recognition to Google Glass. However, despite the fact that Blippar has scope to show off more of its tech potential, they will remove any facial recognition features before officially launching.

It was also revealed that they were creating a new gaming platform called Games for Glass to showcase the first augmented game (by Blippar), for Glass.

CEO and co-founder Ambarish Mitra says: “Glass today can be likened to what mobile phones were in the early 90s. We anticipate that if Glass reaches a couple million users in its first year of launch, it will be a good business opportunity for us to develop in the space. We are investing in the potential of Glass.” Furthermore, Blippar has acquired Netherlands-based AR pioneer Layar. Mitra said: “It gives us the best shot at truly changing the world. It opens doors to new opportunities and partnerships, reduces risk on learning from scratch, gives us headspace in market for whitelabels, and allows us to play in the whole AR market place and compete with people like Metaio and Vuforia with whom we weren’t previously competing.” He also mentions that the acquisition has placed them ahead of the game in terms of being the largest consumer augmented reality company. More intriguingly, however, is the fact that Mitra believes the company “can harness wearable technology to pioneer the next generation of search engines.” It certainly seems viable! After all, instead trying to pick the right keywords to get the right search engine results, you could now simply turn to look at an object and get all the information you need. For Butcher, however, it’s not about the tech so much as changing consumer lives: “I’ve never been passionate about technology for technology’s sake. I love technology and I love gadgets, but I’ve never really needed to understand what’s happening to make them work. I’m much more excited about the applications of technology and how they change consumer behaviour. To me, that also feels like the most exciting space to be in as a startup.” She mentions that Blippar positions itself as a consumer-faced content medium rather than as tech. “Creating an experience for the consumer through new tools and functionality, social linking and the like, is how we are seeking to differentiate.” Blippar were the winners of last year’s Digital Champion award at the Growing Business Awards, commended for their disruptive business model. Are you leading the digital revolution, or know of someone who is? Nominations are open now and will close on the 19th September. For more information and to submit your free nomination, visit the Growing Business Awards site. Image source By Shané Schutte