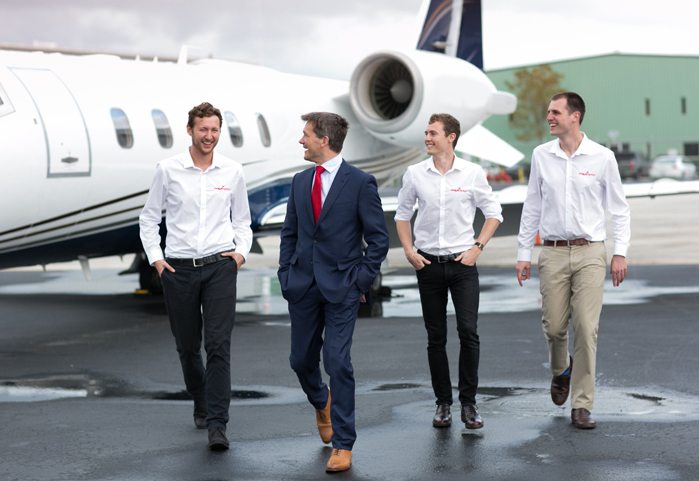 Share via
As a pilot for over half of my life and now running an aviation company, I?m a fairly frequent traveller at the best of times ? for both business and leisure. But in the past few weeks I?ve racked up a lot of new market air miles, even for me. At the beginning of the year we set up our first international office, in Fort Lauderdale, Florida, and in the past six weeks I?ve been over there twice, for a few days each time. One visit in early November was combined with our industry?s biggest global event, NBAA-BACE (fortunately this year it was close by in Orlando) and the other to speak at an industry event in Miami at the end of November. In between, I made shorter trips to New York, Prague, Paris and Vienna, visiting clients, suppliers and agencies. Thankfully we?re now at a stage where my excellent UK team can run the show like clockwork, without needing me around all the time. Whether to put boots on the ground in a new market was a big decision for us, as it is for many growing companies that export. Until January this year, we were handling all overseas flight sales from our UK head office, in St Albans. We?ve seen several years of significant international sales growth, building to a point where almost half of?PrivateFly’s sales are now generated from overseas clients. It?s clear that a disruptive technology-driven approach to chartering a private jet has international appeal, and this was recognised in May this year, when we were ranked 4th of all UK SMEs in the Sunday Times Export Track. Following our ?2m investment fundraising in 2011, we had targeted two primary markets for growth: France (the biggest market for private jets in Europe) and the US (the biggest global market). We also set up dedicated booking platforms for secondary markets such as Russia and Germany. The big decision was if and when to set up a physical presence to serve these new market set-ups. We opted not to in France, and have so far continued to grow sales there and in the rest of Europe from the UK. This has been helped by being able to recruit a fantastic European team here in St Albans, including several native French speakers in sales and marketing. Between them, the central flight sales team speak 11 languages and work on a 24-hour basis to service private jet enquiries from all over the world. This remote approach has not always been easy. But we?ve invested in targeted sales and marketing activity; regular travel; and marketing agency support on the ground in Paris ? all of which has helped to bridge gaps and grow European sales from a central UK location. The pay-off in terms of scalability and business efficiency has made this the right decision commercially for PrivateFly at this stage. But for the US it was a different story. Initially we worked in the same way ? setting up a US LLC and booking platform from the UK and recruiting a 24-hour North American team based here, who had US regional expertise and digital marketing skills. This proved effective initially but it was soon clear that we needed to invest in a ground presence if we were to accelerate the opportunity. We?d set ambitious growth targets and wanted to grow our network more actively, improve sales conversion, and generate greater awareness ? to take a larger market share from existing US-based competitors. So we began to look at location and settled on Fort Lauderdale. It offers the combination of an advantageous location and time zone (which worked well with the UK to provide 24-hour sales support between the US and Europe), lower operating than an equivalent base in central Miami or in New York or Los Angeles and is a growing region for private aviation, including acting as a Caribbean hub. It was key to use our UK expertise and learnings, and to set the right culture in place from the outset. So initially we sent a member of our experienced management team out to Fort Lauderdale, to source office space and organise the set-up. We then leased an office at Fort Lauderdale International Airport, which gave us the advantage of joining a ready-made aviation community. Initially we decided to resource this new market office with our UK flight sales team, on rotating placements. This was followed by local recruitment, including a vice president of sales. We have still continued to rotate the UK team on placements in Fort Lauderdale, which has proved a popular decision, and an HR advantage, helping staff retention and development, and close communication between the teams. Technology is essential here too of course, as is regular travel ? and I will continue to fly back and forth regularly next year. It?s been a big decision, but so far a good one. Of course this investment has to balanced by continued sales growth, but things are going well, and we?re now looking to upscale our US operation in 2017. I?d better get packing for the next trip.
This article is part of a wider campaign called Founders Diaries, a section of Real Business that brings together 20 inspiring business builders to share their stories. Bringing together companies from a wide variety of sectors and geographies, each columnist produces a diary entry each month.?Visit the Founders Diaries section to find out more.

12 Apr 2021
We use cookies on our website to give you the most relevant experience by remembering your preferences and repeat visits. By clicking “Accept All”, you consent to the use of ALL the cookies. However, you may visit "Cookie Settings" to provide a controlled consent.
Cookie SettingsAccept All
Manage consent