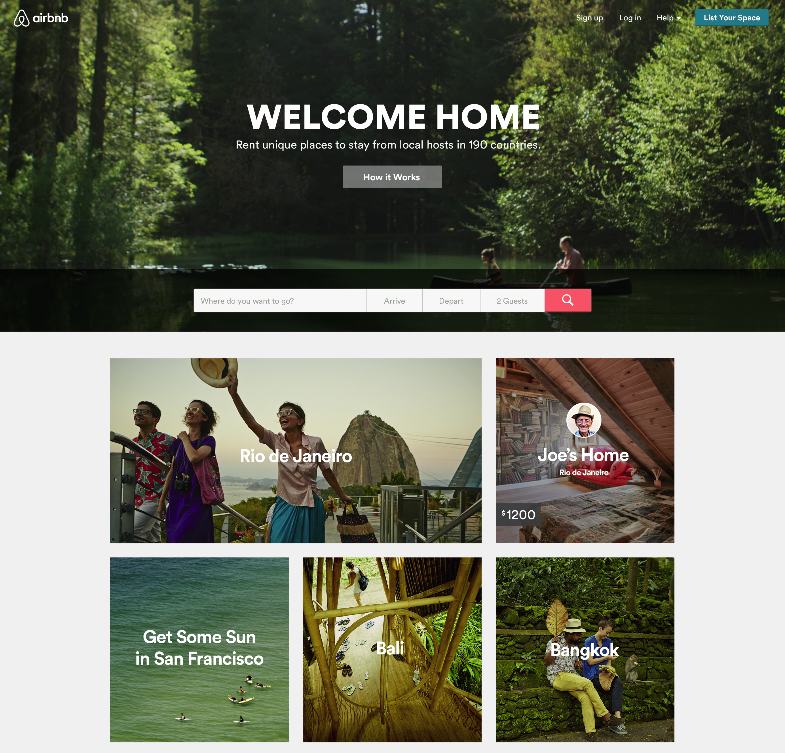 ?We exist in a place where bits and atoms come together?.

In its recent rebrand, Uber describes a new world order: a world in which new digital businesses, from Hassle to Deliveroo, are using technology to power physical services. Trust has been the cornerstone of business for centuries but these businesses in particular rely on trust more deeply than ever before. Why? Because they require us to put our faith in the unknown. We must trust unproven concepts, we must trust fledgling businesses, we must trust strangers we have never met before. In an online world, trust is no longer built through face-to-face interaction but through logo, design and interface. Building instant trust Building trust used to take time. Today, with a myriad online services ? from nannies to taxis ? at our fingertips, we have to make instant decisions on the ones we choose to trust. And very often, it?s all about those first impressions. In 2006, a team of Canadian researchers showed that the average person takes just 50 milliseconds to judge the aesthetic appeal of a website. What?s more, these initial impressions were found to have a lasting impact on the person?s perception of the company. Symbols, visuals and colours all contain inherent semiotic codes that help bring familiarity to the unknown. Dark blue can make a company appear more credible. An intuitive interface can convey professionalism. Recognisable symbols can make a new concept, or emerging company, appear less alien. Processed in an instant, these factors come together to help us make instant decisions on the companies and brands we choose to trust.

Building global trust Today, we can jump in an Uber in over 300 cities across the world. The beauty of the sharing economy lies in its effortless ability to scale. Using the power of human networks, the very same business model can be replicated anywhere in the world. But whilst the model can be copied and pasted, trust ? the driving factor behind adoption ? cannot. In an age of globalisation, company names struggle to hold universal meaning to consumers. Words are so deeply rooted in culture and language that it is quasi-impossible to find one that is both global and meaningful. By contrast, imagery and symbolism are often cross-cultural and resonate strongly with audiences across continents. Take Airbnb. In 2014, its global expansion in full swing, it caused quite a stir as it abandoned its bubbly baby-blue wordmark, introducing in its place a symbolic shape ? the B?lo. An amalgamation of several universal symbols, the B?lo represents a world in which we can belong anywhere. Since its launch, the symbol has been recreated thousands of times by users across the world highlighting its global resonance. In recent weeks, Uber too has adopted a new logo in a bid to speak to its global audience. Grounded in months of research into architecture, textiles, art and fashion, the app icon, chameleon-like, changes to reflect the pattern and fabric of each individual city. The website reads: ?In Mexico, we were inspired by Mexican pink and the patterns in the local tiles; in Ireland, from the Georgian architecture and the lush greens; and in Nigeria, from the ankara, which came up again and again because of its bright colors and beautiful geometric patterns.? For their immense size and power, behemoths like Uber are reliant on millions of individual, independent people choosing to use their service. In order to gain these people?s trust, global must become local.?

Revealed: The 20 coolest brands in the UK

Building trusting communities The sharing economy is built upon transactions between two individuals. Whilst in the ?real? world, people can choose to trust others based on face-to-face interaction, the online world needs a new model. Often, companies employ visual signposts to promote trust between users. As laid out in BlaBlaCar?s D.R.E.A.M.S. Trust Framework, many brands ensure that users have a clear public profile, complete with visible star ratings and other visuals clues such ?Ambassador status? which help users to make decisions on who to trust. They, and others, also use the global online background checking provider Onfido to verify their users? identities and histories. Just a few weeks ago, the company launched its new logo, designed to be recognised as a global trust symbol. For third-party verification services in particular, logos are not just about looking pretty. They become a modern hallmark, carrying a much deeper significance and indicating that any company associated with it can be trusted for one reason or other. From the BSI Kitemark to the Michelin Star, these visual seals of approval provide an instant air of legitimacy, helping users make more confident purchase decisions and in turn, helping businesses to grow. You trust what you can see Trust is the linchpin of any successful business. But as we move to a digital society, businesses must learn to build that trust without the luxury of human interaction. With an increasing amount of services becoming available through our mobiles, it?s what we see on our phone screens ? the design, the logo, the interface ? that will determine whether we can trust the person on the other end.