They inherited their love of watches, clocks and all things mechanical as they grew up in the workshop of ex-RAF pilot and student of Aeronautical Engineering Euan. He also taught the brothers to fly and was active in the historic aircraft industry both flying and restoring historic aircraft.

On 4th March 1995 as Nick and Euan were training for an air-show in their WWII Harvard they got stuck in an inverted spin and their aircraft was involved in a horrendous accident.

Euan died and Nick broke over 30 bones. But this terrible accident provided the impetus the brothers needed to follow their passion for watches.

They established the company in 2002 and unveiled their first watch in 2007, which like their subsequent products has a retro, aviation feel.

Mention luxury to watches to most people and they’ll think of brands such as Rolex and Cartier but Bremont is earning itself an army of devoted fans including musician Ronnie Wood.

The debate continues about the plight of manufacturing in the UK but Bremont demonstrates that it is possible for Britain to create items such as watches, which are not normally associated with the slogan ‘Made in Britain.’

“All of our watches are built in the UK, and have been for a few years now, and a significant proportion of the watch parts are manufactured over here in the UK which is very important to us,” says Nick English, 42.

He points out that there is, in fact, an illustrious history of British watch-making dating back for centuries.

Names such as Harrison, Mudge, Graham, Arnold and Tompion might not mean much to most watch buyers these days but there were very successful and sought after in their day.

“Investment came early on from its founders and other shareholders, but the business has been self funding the last few years,” explains Nick, who left his job in corporate finance to establish Bremont.

The company recently announced the launch of their new British watch making facility in Henley on Thames, South Oxfordshire. The oak framed building has been custom built to provide an ideal facility for the manufacture of their high-end watches.

Bremont is on a long term staged investment programme to develop mechanical, rather than quartz, watch manufacturing expertise in the UK and will be assembling and finishing off key movement and case components in Henley.

The company opened a shop in Mayfair, London last July, which with its collection of motorbike accessories and sporting paraphernalia helps to emphasise, the quirky, heroic image of the brand.

A Bremont boutique opened in Hong Kong in September and it has just unveiled a second shop in the City of London. The company has established partnerships with other well known British luxury manufacturers such as Jaguar.

What does Nick attribute the company’s success to? “I think sticking to our guns from a very early stage,” he says. “We wanted to make a British watch which was built around real engineering and not fashion in a country with an incredible history in watch making.” 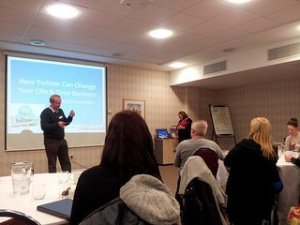