So, big car brands are shutting up shop around the UK. But are these reactions more to do with structural changes in the global car market rather than Brexit? Whatever it really is, many more of us will suspect that the uncertain grip of Brexit is playing an influential role amongst the boardroom decision makers.

Whilst attention is focussed on these corporations which employ hundreds and in some cases thousands of workers, the real barometer of the UK economy tends to go unnoticed, namely how SMEs are responding to Brexit and the eco-political uncertainties that surround it.

Brexit blunders: Why are SMEs so often ignored in the discussions?

The plight of SMEs often passes beneath the radar due to their size – despite providing jobs for 16.3 million people and generating a combined annual turnover of £2 trillion, which is 52% of all private sector turnover.

It’s extremely worrying that more than half of SMEs (57%) are now convinced that the UK economy will fall into a Brexit-inspired recession this year, according to a survey by Bibby Financial Services Ltd.

SMEs are most affected by Brexit uncertainties

The independent financial services provider says small businesses are experiencing their least confident start to the year since 2014 as their investment plans are placed on hold – reflected by the fact that confidence among SMEs has fallen by 5.6 points year-on-year.

Brexit, which has imposed a general economic uncertainty on businesses across the board, is squarely responsible for this malaise of negativity. The number of firms holding back investment has risen from 26% in Q4 2018 to 33% in Q1 2019, the highest since 2015.

Meanwhile, 30% of SMEs hold the UK’s muddled EU exit to blame for creating this wallowing atmosphere of uncertainty.

The figures are stark

SMEs call out for government advice and aid ahead of Brexit

Bibby has also reported that in the face of such difficulties, SMEs are seeking further government support to help get them through this difficult time. With 68% wanting to see the introduction of tax breaks for businesses, whilst 65% want lower business rates while 50% believe the Government must act to remove any tariffs on goods exported to the EU.

Brexit has clearly been very divisive, something which has dominated the UK for the past three years – and I fear will continue to do so for many more to come if we insist on continuing with this disaster which ironically started out as an attempt to cement political unity.

Whatever your views, I hope many will agree with Bibby CEO Edward Winterton who, commenting on the report, said: “Political uncertainty is acting as a brake on the economy. It needs to end. Regardless of whether you supported leave or remain, Brexit has been an agonisingly slow process resulting in our SMEs pulling back on investment when our economy needs stimulus to grow.”

SME entrepreneurs are losing faith, now it’s time for the Government to step in

This report highlights the fact that the traditional have-a-go optimism of SMEs is vanishing amidst a political fog of uncertainty which now stretching out to October 2019 – at least.

The Government has made many red line pronouncements which have then been abandoned. But it needs to listen to our SMEs – the economic backbone of our nation – and carefully consider their calls for real and tangible economic support as opposed to reams of official advice posted on departmental websites.

By their very nature, SMEs are resilient, responsive and determined to survive and prosper. However, if the Government fails to act, then it won’t be just trick-or-treaters having a very scary time come this Halloween.

Jaguar Land Rover wins landmark IP win in China – is it the shape of things to come? 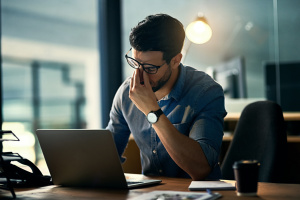 Fight or flight? Why some stress at work can actually be good for you