It’s been two years since the British public voted to leave the European Union. Since the Brexit outcome, we’ve witnessed over 730 days worth of in-fighting between politicians, and seen calls for a ‘vote of no confidence’ from MPs, in the hope that prime minister Theresa May may step down.

Today, it’s important that UK businesses watch the developments even more closely. Why? Because it looks like we’re finally getting to the end of the Brexit negotiations. This means that businesses must start planning out their post-Brexit policies before it’s too late.

Here’s the latest Brexit news that businesses need to know about, today. Read the entire epic tale about the Brexit battle or skip ahead to what matters most to you…

Words from the chancellor

This morning, British Chancellor Philip Hammond said that Brexit “in any form” would leave the UK economy worse off. However, Theresa May’s deal remains the best option out of a bad bunch, he adds.

The chancellor also said that the British economy would be “slightly smaller” as a result of her Brexit deal mainly because we’re going to be leaving the single market.

“Remaining in the single market was the best way to secure the country’s economic future.”

According to findings from the BBC, Brexit could leave the economy as much as 5.5% smaller in a decade’s time.

Public finances could also be affected and may use up an estimated 1.8% of national GDP, according to research by the London School of Economics, King’s College and the Institute for Fiscal Studies.

The above study says that new trade barriers and a fall in immigration as a result of Brexit will have a direct hand in the economic downturn.

This isn’t such good news for UK manufacturing companies that employ European nationals as well as their exporting counterparts who want to get their goods to the continent as easily as possible.

What is Theresa May’s deal?

It’s not a legally binding contract, it’s more of a proposition and sits alongside the 585-page Draft Withdrawal Agreement which will become legally binding in the near future.

The May deal was agreed by EU leaders on November 25, 2018. However official negotiations on everything it contains can only begin after Brexit has happened – which is due to happen on March 29, 2019.

However, she is facing a struggle getting the Brexit/Remain divided parliament to support her deal collectively, and this remains an ongoing battle for her on home soil.

At its heart, May’s deal contains a series of affirmations including a desire to maintain shared interests, co-operation and close partnerships with the EU despite leaving the organisation. Whilst the details are still hazy, here’s what we know so far…

A mixed bag for exporters and manufacturers

According to a report published by independent think tank The UK in a Changing Europe, if the UK does ‘Brexit’ under Theresa May’s deal, Britain WILL remain in a customs union with the EU, but it will leave the single market.

UK exporters must remember that Britain will remain an ally and trade partner with the EU. Whilst there is a divorce happening, it’s in the economic and diplomatic interests of both sides to continue to benefit from trade with each other.

“Ahead of us is the difficult process of ratification as well as further negotiations. But regardless of how it will all end, one thing is certain: we will remain friends until the end of days, and one day longer.” – Donald Tusk, European Council leader

Staying in the customs union

According to the deal, the whole of the UK will remain in the EU customs union.

For SMEs that are currently, or are hoping, to export their products into Europe, staying in the EU customs union means that EU states shouldn’t be imposing tariffs on their goods going into Europe.

If their goods are cleared in one EU country, UK goods shouldn’t be stopped again, meaning they should be able to move with ease throughout the continent.

Even if things change, and the UK stays within the customs union but IS treated like a non-EU entity in some way, then EU states should always impose the same tariffs on British goods across the continent.

There is evidence that the EU wants the UK to remain in the customs union indefinitely, and if so, this is good news for UK exporters and manufacturing firms with an eye on expanding or continuing their services in Europe without disruption.

Whilst the UK is expected to leave the single market under the terms of May’s deal. Northern Ireland will remain within parts of it. But what is the single market? Here is the official description according to the BBC:

“The single market is known as The European Single Market, Internal Market or Common Market, it’s a single market which seeks to guarantee the free movement of goods, capital, services, and labour across the continent.”

According to BBC sources, May’s proposed deal includes a “Commitment to respect the EU’s four freedom – the free movement, of people, goods, services and money around the EU”. However, in her deal, she makes a “specific reference” to ending “the free movement of people in the UK.”

Basically whilst the UK will acknowledge the right of ‘free movement’ in the EU, this will firmly stop in the UK after Brexit.

For British manufacturing companies that employ both skilled and unskilled European labour, leaving the single market could affect their recruitment success.

Many potential employees will likely be dissuaded from economic opportunities in Britain, especially if they’re coming to the UK for the first time after Brexit has happened. Currently, the UK only expects to safeguard the rights of EU nationals already living in Britain.

What is the backstop agreement?

This is connected to the single market issue. The backstop agreement is an insurance policy that comes into force should the two sides not reach an eventual agreement.

This is for the purpose of the region of Northern Ireland, that will remain within the European Union’s regulatory and customs arrangements to prevent the emergence of a hard border with the Republic of Ireland to the south.

It’s now up to Theresa May to persuade her MPs to support her own Brexit deal.

If they reject the deal, the UK could leave the EU with no deal which could stimulate great economic decline. With no safeguards in place such as staying in the customs union for UK exporters and manufacturers, a ‘no deal’ Brexit could terminally affect their livelihoods, as well as many other businesses throughout the UK.

Alternatively, the UK may attempt a renegotiation with the EU, or there could even be a ‘second referendum’ on EU membership in the UK. 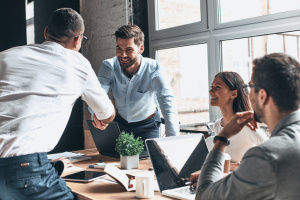 Gain the upper hand with these negotiation techniques