Following Brexit, there’s no doubt we’ll have to work smarter, but if the last recession is anything to go by, it’ll be the country’s SMEs that will be the horse that pulls the economic cart along the rutted road ahead.

That said, none of us should take that for granted and we have to make sure that every part of our businesses are in the best possible shape. Productivity levels in UK businesses have been a perennial issue and a conundrum that even Rachel Riley or Carol Vorderman would fail to crack.

Figures from PwC’s most recent Economic Outlook puts UK productivity more than 30%  behind the US and around 10-15% behind Germany. The firm also predicts that if the productivity puzzle could be solved it would be worth £83bn a year to the economy.

That’s a pretty juicy number that we’d all like a slice of, and while some of our productivity issues can be addressed by better roads, rail and air infrastructure, there are plenty that are a lot closer to home.

Of course, there are opportunities to tackle productivity through the application of technology and working practices, but there are also those that are a lot smaller, and simpler, to deal with that can have a positive effect.

One of them is making sure that workers get suitable breaks away from their desks or workstations. It may sound obvious, but it doesn’t seem to be as commonplace as most of us would expect.

Now, before I go any further, I suspect some reading this will wonder why focus on something so small. I have always been one for attention to detail and believe that every element of a business has to be humming to make the whole operation a success.

I also agree with Canadian psychologist Jordan Petersen who talks about the importance of cleaning your room. It comes from the belief that teenagers want to change the world, but if they can’t keep their bedrooms tidy how can they tackle the big issues.

And if we can’t get our people working productively how can we make our businesses succeed? Breaks, and lunchbreaks specifically, offer the chance to relax and refuel, which gives fresh impetus and creativity to take on the rest of the day.

Being tied to a desk all day is like thrashing a car. It may give you speed and great performance at the start, but it will eventually run out of power.

But surely this sounds more like something from the history books rather than the 21st century.

It’s also not something I see at Pimlico because our people don’t eat at their desks and they are encouraged to go to our in-house canteen or they take time to use the gym or get some fresh air on our rooftop terrace when the weather allows.

However, it appears to be happening in businesses across the country. A new survey by Flexioffices found that almost a third of workers only find time to leave their desks for a full break two or three times a week while also reporting that 78% of Brits don’t have a suitable breakout area to eat their lunch.

This has created a trend that’s been dubbed eating ‘Al Desko’, which won’t be good for the physical and mental health of our workers and the performance of our businesses.

Now it seems like quite a leap to go from Brexit to giving workers somewhere to enjoy their lunchtime sarnies, but the impact of major shockwaves to the economy such as recessions, or in this case leaving the EU, have huge effects on businesses.

It means being agile to the economy as it shifts around us and by addressing all of the small issues, it will be easier to tackle the big ones. 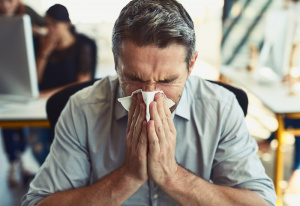