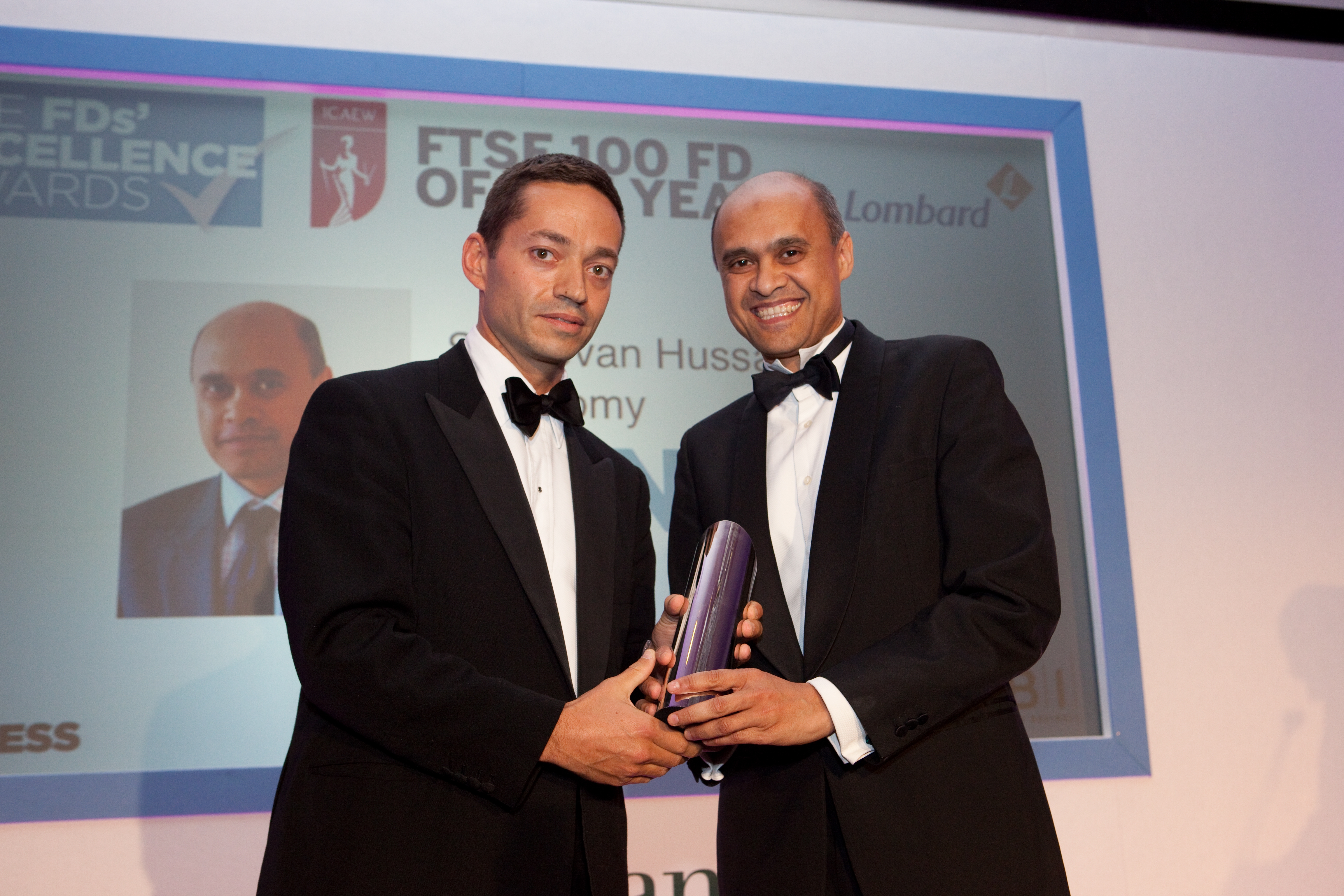 Held in association with the ICAEW and supported by the CBI and Real Business, the awards recognise the best-performing FDs from public and privately owned companies in the UK.

Hussain [pictured with Alex Baldock of sponsor Lombard] was appointed to the CFO role in 2001. Last night, he beat off competition from BAE Systems’ George Rose and Imperial Tobacco’s Robert Dyrbus to win the FTSE 100 category. He was also crowned “FDs’ FD of the Year”. Cambridge-based Autonomy, whose software enables customers to search e-mails, telephone conversations and documents to retrieve data, recently announced record first quarter revenues of £126.1m, up 50 per cent on the previous year, as well as record profits. In February, it successfully raised £500m to fund acquisitions through a convertible bond issue. “Sushovan has all the attributes of a great FD from a FTSE 100 company. Not only does he show strength within the core financial areas; he is also dynamic and able to see where there are genuine business opportunities,” said one member of the FDs’ judging academy. “Understanding the whole business is very important in difficult market conditions.” Other winners were: * FTSE 250 FD of the Year (sponsored by Lombard Services): David MacFarlane, Dana Petroleum * FD of the Year Outside the FTSE 350 (sponsored by RBS): John Stchur, Asterand * Young FD of the Year (sponsored by Lloyds Banking Group): Marc Bradley, Westbury Street Holdings * Private Company FD of the Year: Stephen Morana, Betfair * Auditor of the Year (Large Six): Grant Thornton * Auditor of the Year (Mid Tier): Horwath Clark Whitehill * Bank of the Year: Lloyds TSB * Legal Firm of the Year: Trowers & Hamlins * Technology Firm of the Year: Blackberry/Research in Motion * Inspiring Confidence in the Community Award (sponsored by ICAEW): Jeremy Cox, Coventry Building Society * Inspiring Confidence in Business Award (sponsored by ICAEW): Suzanne Baxter, MITIE Group. Helen Alexander, president of the CBI, says this year’s exceptional shortlist indicates the depth and breadth of financial talent in the UK: “It’s vital that we celebrate these sometimes unsung heroes of business as they will play a crucial role in helping companies recover from the downturn.” The winners of the FDs’ Excellence Awards were announced last night’s at the London Marriott Hotel Grosvenor Square, hosted by former Conservative Party politician and cabinet minister Michael Portillo, who described himself as part of the “former future PM” club. He joked about that “most embarrassing incident” of unexpectedly losing his Enfield Southgate seat at the 1997 general election. “Basically, the term “A Portillo” has become synonymous with eating a bucket a s**t.” Before announcing the winners, he said: “If Gordon Brown is in the audience, I should explain that you only win if you come first, not second.”